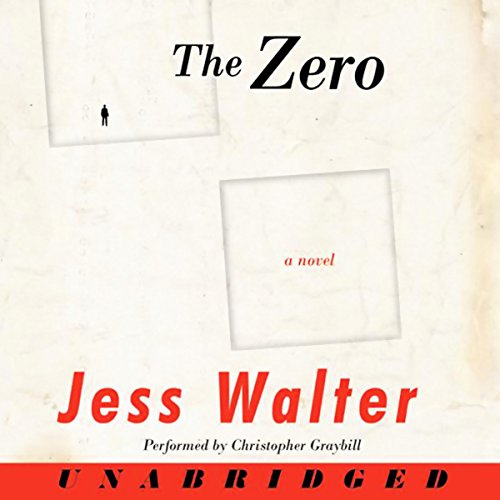 By: Jess Walter
Narrated by: Christopher Graybill
Try for £0.00

The Zero is a groundbreaking novel, a darkly comic snapshot of our times that is already being compared to the works of Franz Kafka and Joseph Heller.

From its opening scene, when hero cop Brian Remy wakes up to find he's shot himself in the head, novelist Jess Walter takes us on a harrowing tour of a city and a country shuddering through the aftershocks of a devastating terrorist attack. As the smoke slowly clears, Remy finds that his memory is skipping, lurching between moments of lucidity and days when he doesn't seem to be living his own life at all. The landscape around him is at once fractured and oddly familiar: a world dominated by a Machiavellian mayor and peopled by gawking celebrities, anguished policemen, and real-estate divas hyping the spoils of tragedy.

Remy himself has a new girlfriend he doesn't know, a son who pretends he's dead, and an unsettling new job chasing a trail of paper scraps for a shadowy intelligence agency. Whether that trail will lead Remy to an elusive terror or send him circling back to himself is only one of the questions posed by this provocative yet deeply human novel.

"A deliriously mordant political satire." (Publishers Weekly)
"Walter builds the hellish aftermath from scratch, transforming that day...into a noir page-turner with powerful social commentary about the marketing of a tragedy and the endless ways in which some citizens have profited by it....Walter is an immensely talented writer." (Washington Post)

What listeners say about The Zero

This was not what I expected. Like many novels about 9/11 by familiar authors, this was largely a departure from the author's other work. The story is explained in the last 15 minutes; I'm just not sure I like the explanation. What this does have in common with other Jess Walter novels is his ability to give his audience pause. The reading by Christopher Graybill is spectacular. Listen til the very end and then decide.

OK, I was confused

I admit it; I spent the first third of the book confused. I hadn't read any reviews prior to listening so I didn't know that Brian Remy, the main character, has memory gaps. I thought my audiobook was somehow skipping around and I couldn't figure out why!

But once I realized what was going on, I just went along for the ride and found The Zero interesting and well written. The story continued to be somewhat confusing, but falling into a whatever-comes-next-I'll-just-go-with rhythm (sort of like Remy) I found a lot to enjoy and never once thought about not finishing. The comically flawed characters, especially Guterak (well, maybe he was more normal than Remy after all) and the insane situation where son Edgar is mourning the death of his (very much alive) father kept me chuckling at the absurd situations that seemed to come out of nowhere. On the other hand, the disjointed story (I don't care what it's a metaphor for or statement about!) and the unsatisfying ending prevent me from giving it more stars.

I love Walter's writing style and would recommend the book for that alone, but if this had been my first Walter read, it might have been my last.

after completing Beautiful Ruins, which i loved, i immediately downloaded The Zero, but eventually quit listening. i got tired of talking myself into listening to more. Perhaps the style, the abrupt ending to scenes, the main character's own confusion about what he is doing, doesn't translate well to audio.

Would you try another book from Jess Walter and/or Christopher Graybill?

i love Jess Walter's books....but not this one

What aspect of Christopher Graybill’s performance would you have changed?

he did fine with what he had

the character was like Chauncey Gardner - out of it

If you could sum up The Zero in three words, what would they be?

If you’ve listened to books by Jess Walter before, how does this one compare?

Not as good a book as beautiful ruins

Have you listened to any of Christopher Graybill’s other performances before? How does this one compare?

I don't get it

I had just finished Beautiful Ruins by Jess Walter and was blown away. I immediately bought this because I was so impressed by the author's writing style. I really wanted to like this. It is well written, but it's just not for me. Didn't even finish listening. I will definitely try another Jess Walter book though.