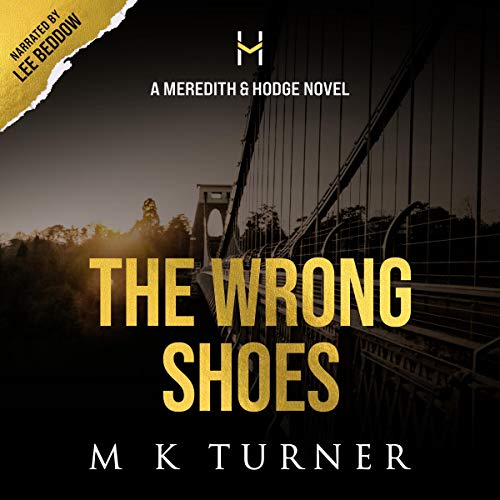 Murder. Kidnapping. How far would you go to get attention?

A self-confessed murderer has kidnapped one of Meredith’s officers. They want Meredith to prove an apparent suicide was, in fact, murder. He’s working against the clock, as the kidnapped officer has been locked away with limited food and water.

Hodge is searching for the ex-husband of a prison inmate. She needs to establish he’s still alive, or her client could be charged with his murder.

As their cases collide, they find that one man holds the key, and he might be dead.

The Wrong Shoes is the third book in the Meredith & Hodge series. If you like great storytelling, surprising plot twists, and compelling characters, then you are ready to meet Meredith and Hodge.

What listeners say about The Wrong Shoes

I love this series. The characters are brought to life by the narrator. The story line is gripping and I would definitely recommend this book and the others in the series.

I received a free copy of this book in return for an unbiased and impartial review.

I’ve had this series in my library for a while and only got round to listening to them at the start of the year. I love to listen to book series together when I can and this one certainly hasn’t been a disappointment.

The story is excellent and narration really good, I’ve been put off by certain narrators in the past who’ve dampened what could have been great books but I thought the narration and story in this instance complemented each other brilliantly.

Absolutely brilliant the books are really building up, I love Louie and Linda they make me laugh, such a lot going on in this book, with a cliffhanger ending, narration is brilliant

Lee Beddow is a great narrator and perfect for this book.

Once a more another great thriller from M K Turner.
Great plot and sub plots .I was hooked from the start and had to keep listening. A great third book in this series. The characters are strong and grow with ease.
A great paced and enjoyable murder mystery.

Another great book in the series.

Fantastic story, great characters and a wonder narrator. I would highly recommend to any detective enthusiasts.

I just loved how this unfolded

An excellent story. Well written and intriguing. I loved trying to guess what the evidence was pointing at. Excellent characters and relationships.

I love the different relationships between the characters in these books. The professional achievements backed up by the insight into personal relationships and how they become intertwined with the everyday. Put that with amazing cliff hangers and on the edge of your seat plot twists makes for an exciting read/listen!!!

Another great listen from Marcia Turner. This one doesn't disappoint. You really want to know what is going to happen so you just have to keep listening. I even shed a little tear, as some parts were quite emotional. As usual, the ending leaves you wanting more!
Marcia's books are more than a detective/murder/thriller, there's a little touch of romance in there too. Something for everyone. Highly recommended!

Another excellent story in the Meredith & Hodge series. Lots of twists and various plots involved and we get to understand a few more background details about some of the characters. Thoroughly enjoyable. The narration is expertly done and brings the book to life. Can't wait for the next one.

I received a free copy of this audiobook either from the author or a promotion or giveaway and am voluntarily writing an honest and unbiased review.

This mystery novel had so many twists and turns that you did not know the guilty party till the end.

It was a very interesting plot with a sister trying to prove her sister didn't commit suicide. But in order to prove it she becomes a murder herself.

This book was entertaining and kept you engrossed throughout.

Meredith and Hodge rock it again

I am so addicted to this series. Meredith is so headstrong and intense in his desire for control it is almost comical. Hodge on the other hand is just a strong willed maverick in all she endeavors. That being said, especially in this novel, their huge sense of compassion and integrity are very obvious. This is a twisted in so many ways yet the tenacity of the human spirit shines in this novel in several characters. I hope that other readers find this novel as incredible a read as I did. I am looking forward to the next book. Meredith and Hodge are too much fun. Lee Beddow does a bang up job of bringing this novel to life for the reader.

Another, different mystery. I love how the author never does the same thing from one book to another. I also love the fact that this is not just about the mystery but about Meredith and Hodge.
There are times that I love Meredith and other times I felt like slapping him but he stays true to character. He does change a little and I like how he pushes Hodge for answers instead of leaving things to fester.

There are loads of twists and turns in the mystery and the relationship between the two main characters.
We meet one of Merediths old time friend and I love the dynamic between them, they made me laugh at certain points in the book.
Can't wait for book four!

3.WRONG..SHOES
..The killer wants to be caught, writing a letter to Meredith. Maybe a diary would be better, or the computer, adding that Meredith is very organized. Meredith wants Hodge back. With a teen age daughter now in the picture it is a little bit tricky for them. Then one of Meredith’s team is kidnap solve the killer’s sister old case and he will release her. A lot of action with a good ending. Given ARC audio which added to the story by Lee Beddow. For my voluntary review and my honest opinion.

More Meredith and Hodge , please! I love this series! Brilliant twists and turns to keep you guessing.

The devil is in the details!

Twists and turns keeps your attention throughout.

I enjoyed this book very much! This is my first Meridith and Hodge book. I love the way M. K. Turner keeps the reader guessing through the entire book. Now I'll need to go back and listen to the previous books. Lee Beddow does a wonderful job with the narration. This book was a pleasure to listen to and I would like to thank the author, narrator, or publisher for providing me this audiobook at no cost in exchange for my unbiased review.

I am a Meredith & Hodge fan! I love the character development, and this story kept me guessing until the end. I like that Patsy's investigation ties in with Meredith's search for a killer. As always, the narration is perfect for this series and makes me want to keep listening.

This is the third Meredith and Hodge book, and things keep getting better.

Meredith is pulled into a case where a retired police officer is found dead by Hodge.  The criminal is soon discovered. However, the criminal kidnaps on of Meredith's officers and refuses to tell him where she is until Meredith solves the case of her dead sister, whom she insists was not a suicide but a murder.

Hodge, meanwhile, is asked to investigate a missing person by the woman put into prison for his death. As developments continue the cases combine. Will the officer be found before Meredith solves the case and is given details of where she is being held, or will she end up dead because her captor is in custody and she has no further means of survival? And why are Meredith's and Hodge's cases related?

The story was more convoluted than the previous one, and I admit to being distracted occasionally while listening to it (doing multiple things), so probably missed a few clues on this. However, it is a very well written book, and the narration is as well done as ever.