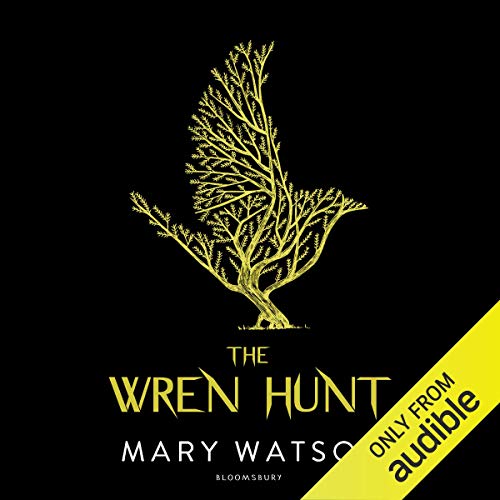 Every year on St Stephen’s Day, Wren Silke is chased through the forest in a warped version of a childhood game. Her pursuers are judges - a group of powerful and frightening boys who know nothing of her true identity. If they knew she was an augur - their sworn enemy - the game would be up.

This year, the tension between judges and augurs is at breaking point. Wren’s survival, and that of her family, depends on her becoming a spy in the midst of these boys she fears most and using her talent, her magic, to steal from them the only thing that can restore her family’s former power for good. But Wren’s talent comes with a price. The more she uses it, the more she loses her grip on reality, and soon she’s questioning everything she’s ever known about her family, about augurs and judges and about the dangerous tattooed stranger who most definitely is not on her side....

What listeners say about The Wren Hunt

This is a sad little tale – beautifully read, and quietly absorbing, but ultimately sad. It covers betrayal, cheating, deception, hatred and bigotry, the warmth and support of family, but also the harm unquestioning loyalty can sometimes cause. It seems everyone lies at some point – even poor Wren.

The Amazon synopsis is good – I didn’t, and still don’t having finished the book, understand the initial chase. The start made for an uncomfortable read – a young woman/girl being pursued by a group of young men/boys with intent to do what exactly if they caught her? The writer captures Wren's fear well - hence my unease. And for why? If they didn’t know she was an Auger why would they pursue an ordinary girl like that? Why were the adults in her life so relaxed about something that terrified and, as it turned out, hurt her? In fact that’s a theme throughout the book – who’s looking out for Wren’s interests, as opposed to Auger, or Judge interests?
The book is set in modern day Ireland, with coffee bars, pizza, buses and trams, mobile phones, taxis, but no Ubers! Wren is conflicted by almost everything, endlessly doing what others want, and the book charts her struggles to sort out what it is, or should be, that she wants. I’m not sure she ever gets there really, and at times you long for her to tell some of them to take a running jump… There’s a blossoming love story that winds through most of the story, that’s well written, but it brings precious little joy to either party.
If there is magic here, it’s quiet and low key – there are no fireworks or whizzy flash bangs here. No champion steps up to blast away the baddies. When fights are had they use fists, knives, guns. We see nothing of Judge magics that I recall, just Wren’s scrambly eye, or whatever she calls it. She has visions – which do her little good – and she sees patterns in everything.
This is written with fine descriptive detail. You can see the shabbiness of her family home, the grandeur and flowers of Harkness House, the wildness of the woods, Wren becomes someone you care for (someone has to after all). The book is absorbing, at times a little slow, but it’s worth patience – the ending is certainly not slow.
This is no Hunger Games, as the description might suggest, and if it is aimed at the YA market, us older A’s will find it a good solid book as well. But, as I said at the outset, it is, overall, a sad tale of betrayal.

I really enjoyed the rhythm and style of the story telling. Finished wanting more! Beautiful and addictive

A story that stands out

Wren is bullied by the boys in her village. At first you think this is what the story is about.
As the plot progresses we learn there's more to it. Ancient magical traditions and societal roles also play a part here.
On the surface we have an interesting twist on Romeo and Juliet - Wren's family has an ancient magical feud with others. Wren risks her life for her family.
Underneath, the theme of nature vs nurture repeats itself constantly. Is Wren choosing the right thing? Will the magic in her blood and the nature of herself and her enemies determine their bloody faith?
At times it was a bit difficult to follow the plot, the ideas and the story where a bit too erratic, but the story is worth it.

Based on Irish Folklore, The Wren Hunt is a gripping story which merges contemporary and fantasy fiction beautifully. Like a lot of fantasy it had a bit of a slow start, but Watson builds an amazing world, and by the end it was difficult to tear myself away from. Titely highlights this with her perfect narration, bringing the characters to life. I can't wait to start book 2!