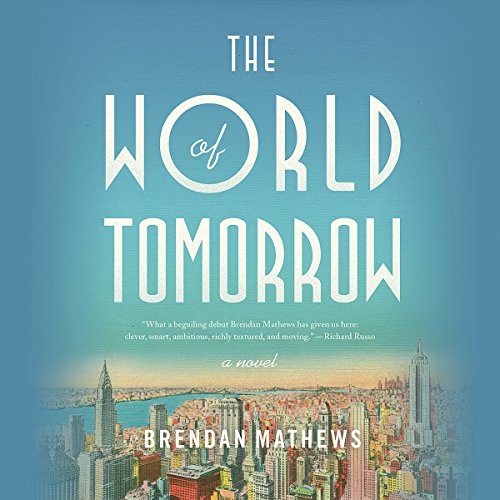 The World of Tomorrow

By: Brendan Mathews
Narrated by: Graham Halstead
Try for £0.00

Three brothers caught up in a whirlwind week of love, blackmail, and betrayal culminating in an assassination plot, set in prewar New York.

June 1939. Francis Dempsey and his shell-shocked brother Michael are on an ocean liner from Ireland bound for their brother Martin's home in New York City, having stolen a small fortune from the IRA. During the week that follows, the lives of these three brothers collide spectacularly with big-band jazz musicians, a talented but fragile heiress, a Jewish street photographer facing a return to Nazi-occupied Prague, a vengeful mob boss, and the ghosts of their own family's revolutionary past.

When Tom Cronin, an erstwhile assassin forced into one last job, tracks the brothers down, their lives begin to fracture. Francis must surrender to blackmail or have his family suffer fatal consequences. Michael, wandering alone, turns to Lilly Bloch, a heartsick artist, to recover his lost memory. And Martin and his wife, Rosemary, try to salvage their marriage and, ultimately, the lives of the other Dempseys.

From the smoky jazz joints of Harlem to the Plaza Hotel, from the garrets of artists in the Bowery to the shadowy warehouses of mobsters in Hell's Kitchen, Brendan Mathews brings prewar New York to vivid, pulsing life while the sweeping and intricate storytelling of this remarkable debut reveals an America that blithely hoped it could avoid another catastrophic war and focus instead on the promise of the World's Fair: a peaceful, prosperous "World of Tomorrow".

"What a beguiling debut Brendan Mathews has given us in The World of Tomorrow: clever, smart, ambitious, richly textured, and moving." (Richard Russo, Pulitzer Prize-winning and New York Times best-selling author of Everybody's Fool)

What listeners say about The World of Tomorrow

Much could have been made of this novel if . . .

. . . it had had the wire brush of a fearless copy editor who could spot a touch of author's indulgence at fifty paces.

The novel while entertaining was not a great 'read'. I'd echo the comments made by others that it was overwritten. There was far too much repetition. The epilogue had to my listening ear the feeling of haste and let's just get the darn thing finished. For despite the wordiness and 'oh really's? and one or two raised eyebrows on my part - I did persevere to the end.

I picked the book because of the World's Fair setting but was disappointed that so little of the action took place there.

The most memorable and to my mind thought-provoking scene in the book was not the action at the Fair, but the scene in the Welfare office and the confrontration between the struggling married woman and the Clerk fuly armed with the sledge hammer of policies and forrm filling. 'Dressed in a brief authority' was that Clerk and although government policies stated that married woman needed to provide lots of information at the end of their encounter - a good thing happened.

If it was a school report - could do better. I would perhaps recommend it to others but only as a summer read.

A terrific story from beginning to end. Beautifully written and presented. A treat for the ears.

I obviously really liked this book...

as you can see by my giving it so many stars.

Usually books that entail so many characters as this one can be hard to follow, but the author did a good job of bringing disparate characters together toward the climactic conclusion.

That being said, (not really a spoiler alert)... I was a little disappointed with the fate of certain characters. (I am not saying which ones so I am not spoiling your enjoyment of this good book). It was hardly a &amp;quot;bad ending&amp;quot;; i just didn't get exactly what I wanted or expected-too bad for me.

Well written but in need of serious editing

A truely engaging story never seems too long, and although there is much to admire in The World of Tomorrow, it was seriously over-long. The narrative jumped between multiple characters, and even though the story takes place over the course of a week, there were numerous flashbacks to fill in the backstories of the cast of characters. I admired the book rather than enjoyed it. I will give the author a big star, though, for a great ending.

A combination of great writing, memorable characters, well captured historical context and an intricately woven plot made this thoroughly enjoyable.