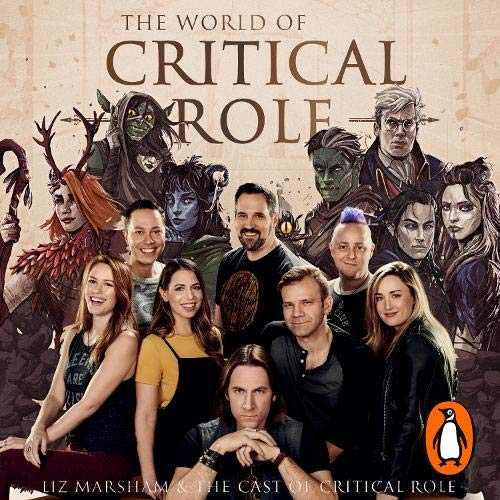 The World of Critical Role

Dive deep into the history of the world's most popular fantasy RPG livestream with the cast of Critical Role in this definitive guide.

From its unassuming beginnings as a casual home game between friends to the role-playing phenomenon it is today, Critical Role has become the stuff of legend. This audiobook chronicles how a circle of friends who all happen to be talented voice actors built the most-watched tabletop role-playing livestream of all time.

Discover richly written insights into the locations, characters and adventures featured in the hundreds of episodes across Critical Role's two campaigns, Vox Machina and the Mighty Nein. Go behind the scenes with exclusive interviews with Dungeon Master Matt Mercer and the entire Critical Role cast as they explore their characters' most triumphant moments and darkest hours. And celebrate the massive community of Critters who support and expand the show's world through a highlighted tour of the crafts, cosplay and art they create every day.

Featuring a foreword from Felicia Day and the inside story you won't find anywhere else, this audiobook is your indispensable guide to Critical Role.

What listeners say about The World of Critical Role

Awesome and really in depth. I’ve been a critter since campaign one and I learned A LOT from this audiobook. Really enjoyable and relentlessly positive, this gives a thorough grounding in all things CR related. Is it Thursday yet? : D

fab listen , only thing is would have liked to have heard the actual cast saying their bits with it being the audio book , but apart from that was interesting look into the world of critical role and was nice to hear where all the cast came from .

This is a fantastic look back through the history of critical role. There are a few insights into things we didn't get to see but most of them are in the hardback book. I have purchased both as I have more time to listen than read. It was nice hearing Mary narrate this rather than someone disconnected too.
I would recommend getting the book as there are snippits into the home game that you might not have seen before.
All round nice read for critters! Even more amazing now knowing what else they have accomplished!

Although inside baseball, this is a warm and generous look at the phenomena that is Critical Role. A record of a game and franchise which has genuine warmth, scope and verve.

Hard Copy probably the better option for this book.

I think this book is designed to sit on a coffee table to catch the eye of an uninitiated guest or to let a Critter relive some of their favourite moments as they thumb through it. If you’re new to Critical Role or a long time fan then the Hard copy might be a better option.

As an audio book a you loose the striking art and photos, so with just the text the information is a bit light. As I say it reads like it was written for people who haven’t heard of Critical Role or D&D. So it explains a lot of the basics of the show, people who make it, people who love the show and the game they play.

For a person new to the show I don’t think this audiobook is best way to learn about it, watching the show itself is a much better way. Likewise a person who is a long time fan might feel like you know a lot of this already and are having it over explained to you. I certainly did.

However as a hard copy I think this book would work perfectly as a new person will get information in an bite sized form with glorious visuals and an long time Critter can take in the art and skim through to the bits they didn’t know already.

The reader does a good job of capturing the enthusiasm and joy of the show but sometimes the pronunciation of a name and place can differ from correct to incorrect in the same paragraph. Something must of slipped through the net there.

Thank you to the critters

Lovely narration. Fun facts about a well loved company.
Don't forget to love each other.

A nice look back, but nothing new

This was alright. Nothing surprising for long time game of the show. Anyone who didn't watch campaign 1 and doesn't intend to will get more from it but it does, of course, have a tonne of spoilers for that campaign, so be aware of that before going in.

The production is sloppy. Mary's narration is good but there's quite a few instances where she mispronounces something, then pronounces it properly later on, only to mispronounce it again later still. Maybe it was recorded out of sequence before she was advised of the correct pronunciation. It's not a terrible thing, just annoying for long standing fans, especially since Mary was a guest and kept up with campaign 1 herself.

An in-depth look into the background of critical role and all people involved in the show! Hearing how the cast grew up was incredibly humbling and was holding back happy tears throughout. A must listen for Critters!

Lots of new trivia to learn and a great listen!

Mary Elizabeth did a wonderful job reading this. a couple of strange pronunciations sometimes (I swear thats not how you say Cadeusus), and a couple of errors (Percy and Vax got married?) but all in all her performance was 100% all the way through.

The book itself was full of wonderful information about both campaigns and even a long time fan like me learned so much. It was a wonderful companion for the long car journeys I had to make recently. Deffo recommended.