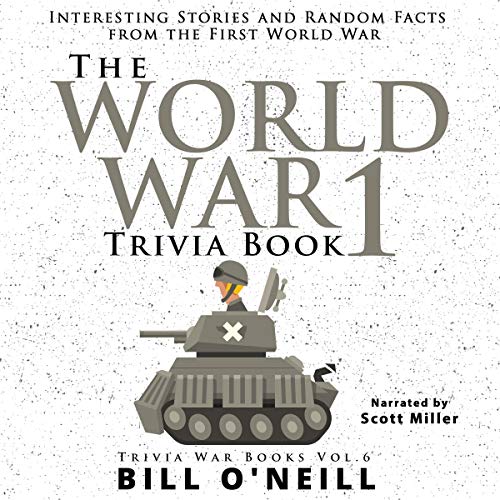 Welcome to World War I, formerly known as the “Great War”, where men fought and died in trenches and did whatever they could to avoid chemical weapon attacks. You may have read a few things about World War One or remember some things from your history classes, but this book is here to help fill in the blanks. Get ready to learn all about World War One, from the ideologies and complex geo-political alliances that led to war, to how average soldiers tried to deal with life in the trenches. This book will bring to life some of the most important battles, but it will also go far beyond that to how the war ended and how it continued to linger on for many, especially those with PTSD.

Each chapter of our trivia books is broken up into 15 short sections that will introduce you to major players, major ideas, and sometimes weird stories. Unlike your high school history teacher, we’re not going to put you to sleep with the names of a million generals, or an endless line of dates, but instead we’ll show you the war from a series of different perspectives and themes. To go along with the 15 short breakdowns of the war, every chapter also ends with 20 fun facts or bits of trivia, and five questions to test your knowledge on World War One.

So put on your pickelhaube, man the trenches, and get ready to learn....

What listeners say about The World War 1 Trivia Book

This is a good trivia book. It is more significant that it teaches its listeners about the WW1; however, it is fun due to the trivia context of the book. Random questions, followed by meaningful answers is the mode of this book, and it might just be one of the best ways to learn about this piece of history while having fun.

I received this book for free as a review copy. In return, I have left this unbiased review.

A lot of history, so little time.

This book contains all the major stories about the first world war. While many people just know it in retrospect, it is always great to fully explore what really happened. This book solves this problem, and it gives the listener fun trivias as well.

I received a free copy of this book and I have left this review to help others understand what they wish to purchase.

Which isn't to say I thought this would be a dull listen, but I was surprised at how much I was drawn into these facts and lesser-known things. Clearly a lot of time and effort went into this book, and it's made me more curious about the other trivia books from Boll O'Neill. Scott did a wonderful job narrating, and this whole thing is a huge need for history nerds like myself.

We won't come back till it's over, over there.

World War I itself must have been hideous in the transition period between old fashioned and more modern type warring, with the squalor of the trenches, poison gas, supplies delivered by horses, and over nine million combatants and some seven million civilians killed. It was, as this book tells us, a complex war. But author Bill O'Neill and narrator Scfott Miller make this period fascinating with snippets of stories mixed in with the facts, all given in easy to absorb bite-sized pieces. Divided into six topic led chapters such as causes, the Bolshevik revolution, aftermath etc., a general impression, supported by numerous facts, is given, very different from the chronologically led, date heavy presentation of most histories making it enjoyable to read and, with a quick multi-choice quiz following each chapter, fun and rewarding.

The First World War trivia book is a good addition to the other trivia series from Bill O'Neill, perfect for the curious, games players and anyone who does not want to become bogged down in the, often badly written, historical tomes but instead does want to understand the present by looking back at the building blocks of our past. And for anyone wanting to explore the topic further, there are brief suggestions on how this can be done.

Good book, good narration, important topic palatably presented. Should be required reading in every school. My thanks to the rights holder who, at my request, freely gifted me with a complimentary copy, via Audiobook Boom.

Good, detailed, educational
Reccomend to anyone interested in World War 1 and the events leading up to it.

It's a bit repetitive at times but there are plenty of things to learn. I enjoyed it. Scott Miller does an excellent job with the narration.

please add a star 2 each category 666

about the best history book ever and i have plenty of them(on the world wars). great great job. never a moment of anything but great info. cover little before and after also. a must listen. wish i had things like this in school. wonderful book. tks
i got a free copy of this book

A fun trip through WW1

This book is a quick read. Fun and engaging. Explains all the details of World War One in a easy to understand way.

The art of trivia can be very trivial but this book has great trivia facts.

An interesting approach to history

It's hard not to wonder about most of the questions in this book. I guess this was the mindset of the author while making this book. It answers most of the famous questions about the ideologies, political issues and implications of the war. Learning via trivias is convenient and easy. The information is small, and presented in a fun way to aid assimilation. Overall, this might just be a good way to teach history to millenials.

I received a free copy of this book from the author and I have left this unbiased review in return.

How much do you know about the WW1? Well, this trivia book helps it's listeners find the answer to that question. For some people, it is sometimes best to learn history via trivia. This way, it is not as boring or depressing as sitting in a history class for hours. This book asks random questions about this great time in modern history, along with deeply researched and verified answers which make the listener more informed afterwards. Good stuff.


I received a free copy of this book from the author and I have left this unbiased review in return.

This is the eleventh book I’ve read/listened to by this author and I will continue to listen to then. Each book, and this is no exception, is full of interesting information, juicy tidbits and little known or surprising facts. I find his books fly by and yet they offer a great overview. I enjoy how he organizes the information and his little tidbits leave me wanting more.

This is the fourth book I’ve listened to by this narrator ( Scott Miller ) and I would listen to another. All these books have been by Bill O’Neil. Scott does well presenting this information In a way that does not put me to sleep.

This is yet another great trivia book by Bill O’Neill, this time about World War 1. What’s great is that I learned more about this time of our history. I’ve learned much about military history due to marrying a military history buff but I was surprised by how much more I was able to learn from this book. As usual, Mr O’Neill does his homework on a topic and brings it to the world in an easy to follow and fun format. The narration by Scott Miller is well done. He has a nice voice to listen to and reads at an easy pace. Overall, a fun way to learn more about World War 1.

World War 1. Trivia.
Great book full of interesting pieces of information and many little known facts.
Well written and presented.
I have listened to quite a few of the authors books and have enjoyed them all. But this book is the best and most interesting.
Well narrated, clear and concise.
I received a free copy of this audio book at my own request and voluntarily leave this review.