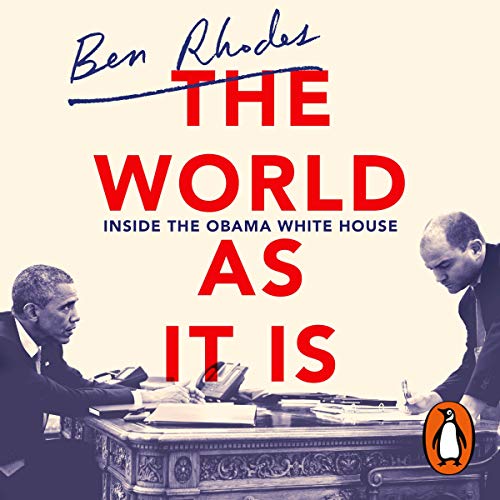 The World As It Is

Random House presents the audiobook of The World As It Is by Ben Rhodes, read by Mark Deakins, with an introduction read by the author.

This is a book about two people making the most important decisions in the world. One is Barack Obama. The other is Ben Rhodes.

The World As It Is tells the full story of what it means to work alongside a radical leader, of how idealism can confront reality and survive, of how the White House really functions and of what it is to have a partnership, and ultimately a friendship, with a historic president.

A young writer and Washington outsider, Ben Rhodes was plucked from obscurity aged 29. Chosen for his original perspective and gift with language, his role was to help shape the nation’s hopes and sense of itself. For nearly 10 years, Rhodes was at the centre of the Obama administration - first as a speechwriter, then a policymaker, and finally a multipurpose aide and close collaborator.

Rhodes puts us in the room at the most tense and poignant moments in recent history: starting every morning with Obama in the Daily Briefing; waiting out the bin Laden raid in the Situation Room; reaching a nuclear agreement with Iran; leading secret negotiations with the Cuban government; confronting the resurgence of nationalism that led to the election of Donald Trump.

This is the most vivid portrayal yet of Obama’s presidency. It is an essential record of the last decade. But it also shows us what it means to hold the pen and to write the words that change our world.

What listeners say about The World As It Is

This is the time to listen to this book

As European, I am very annoyed, how things are developing in the US. The way how our good relationships are destroyed, I had thought impossible.

This book shows us that the opposite is possible, I sincerely look forward to the next elections.
Hopefully we can forget the present nightmare and repare the damage done.

An incredible insight into a Whitehouse where things actually worked.. Rhodes provides a perfect blend of policy details, and the impact that operating at the highest levels of government has on the individual (and those close to them).

It seems so long ago, now, but it was nice to think back to a time of dedicated people trying to solve problems and ponder how this resulted in the garbage fire that followed the 2016 election.

Fascinating Insight into The Obama Years

Ben Rhodes is a great writer, he brings the Obama years to life and the impact on-both the world and his own life. Great listen and read!

A powerful narration. Reflective and introspective. I love how this book gives an internal point of view of many historic moments without slipping into self congratulatory window dressing. Instead it focuses on the thoughts and emotions of the protagonists of these moments.

Enjoyable listen, and well narrated with strong Obama impression! Gives a great perspective into the Obama White House and the key events across the world during this time

Excellent inside view of Obama Presidency

Excellent inside view of the Obama Presidency and its foreign policy. Understanding of the world and how it works for us all to learn for the future.

This is an incredibly written book

A beautiful memoir of Ben Rhodes time in the Whitehouse, this book made me smile and cry.

This is an incredible and detailed insight into the Obama administrations 8 years. Highly recommended for anyone with an interest in or trying to make sense of our current crazy politics.

Absolutely brilliant book. Truthful and no nonsense writing style. Great performance too, though I would have preferred Ben to keep reading past the introduction.

My only complaint is that I wish that Ben Rhodes had narrated the whole book and not just the Preface. It was easier to hear the emotion behind the narrative when he was narrating his story.

As inspiring as sad

Inspiring and very well written as the speeches he wrote for President Obama. Sad, as there is a sense that all that he believed in and has worked on for almost ten years has gone.

this book offers an intimate portrait of the Obama Administration Through The Eyes of one of his closest aides. Ben Rhodes did a good job of revisiting the eight years that he would have toiled wholeheartedly believing in everything that President Obama and the administration's worldview stood for. he was candid and intimate about how this experience would have affected him at various stages and shaped the person he is now