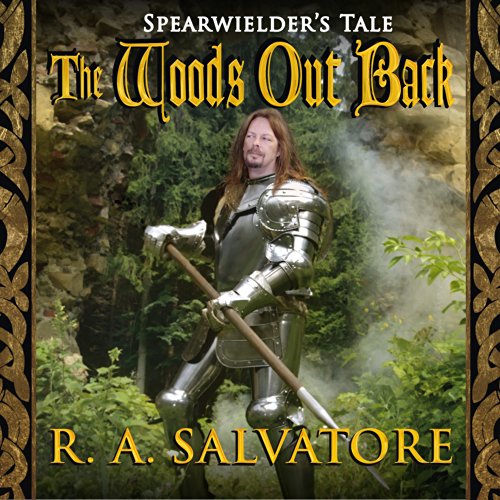 The Woods Out Back

The Woods Out Back

By: R. A. Salvatore
Narrated by: Paul Boehmer

Gary Leger thought life after college would bring great things. Instead, he's stuck in a dead-end job and finding that the real world isn't all it's cracked up to be. But when he walks into the woods behind his house one day, Gary finds a world beyond the "real world" - a realm of elves and dwarfs and witches and dragons. There he discovers that he is the only one who can wear the armor of the land's lost hero - and wield a magical spear. And if he doesn't, he can never go home again.

Not a bad listen.

This was a favorite story of mine from my High School days. It all began when Gary Leger came home from a dead end job at aplastics factory. Looking forward to a bit of relaxation in the woods behhind is family's house before dinner, he took a copy of is favorite book, The Hobbit, along to reread. Things get interesting when he falls asleep after seeing what he at first believes to be a doll that subsequently shoots im in the hand with a tiny dart. Wen he wakes he finds imself in a mysterious world called Fairy, in the company of Mickey McMickey, a jovial Leprechaun. Joined later by Kelsie, te stern-faced Elven warrior, the companions set off on Kelsie' life quest, to reforge the ancient, magical spear tat was once wielded by the land's long-dead hero. To do this, however, they must first recrit the finest blacksmith in the land, a dour Dwarf, travel to the lair of the land's one dragon and somehow persuade him to furnish the fire needed to reforge te spear, as no fire of mortal origins could soften its metal. But the companions must evade the forces of Prince Geldian, son of the land's despotic king, as well as th sinister minions of the evil sorceress Ceredwin, who will stop at nothing to see that the spear is never reforged or, even if it is, that it never falls into the hands of a true hero who could defeat her.
The story is excellent and the narration is very close to it. My only real complaint is that Paul Boehmer occasionally has problems with inconsistent pronunciation, usually of Ceredwin. Generally he gives the C a hard sound which I believe is indeed the correct pronunciation, but occasionally he slips up with an S sound. Other than that the narration is very well-done. You should have no trouble at all telling which character is speaking, as Boehmer gives each one a distinct voice and personality. All in all a very good listen.

Definitely a fun romp! A quick adventure in the vein of the old 80's and 90's flicks where the main character get drawn into an amazing fantasy world.

I got lost in this book, in a good way! I could feel the woods and See the faeries! amazing! great narration!

The plot was predictable, and the characters were flat stereotypes. The narrator insisted on pronouncing the witch's name two different ways, which was tremendously distracting.

This book takes the classic formula from The Wizard of Oz and Weaves in a little bit from every corner of high fantasy fiction.

It's not particularly good, but it is a fun way to pass the time.

The voice actor does a terrific job with multiple characters, but there are weird inconsistencies in the way various names are pronounced.

What did you love best about The Woods Out Back?

I was able to identify with the Gary, I too spend a lot of time in fantasy and you just can't help but wonder what if?

What was one of the most memorable moments of The Woods Out Back?

During the first battle with the trolls Gary is magicked into a log by Mickey. He ends up with troll footprints running up his armor.

The narrator had difficulty getting into the characters, accents were dropped or just didn't fit, This is a story I know well and it rankled. The narrator does get better but it takes him a long time.

This series was the only one I had not read of this author. He is my favorite! But this one was a very childish. Could not finish it. Skip it!