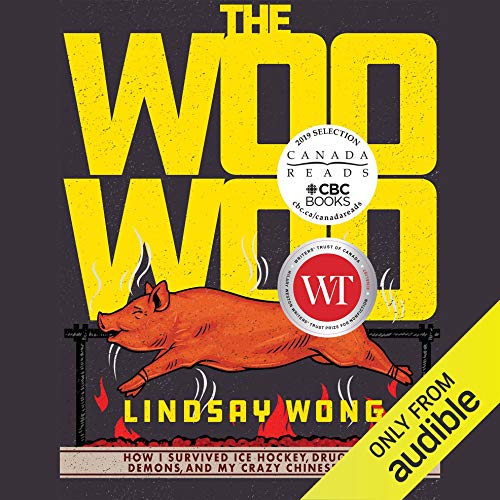 In this jaw-dropping, darkly comedic memoir, a young woman comes of age in a dysfunctional Asian family whose members blamed their woes on ghosts and demons when in fact they should have been on antipsychotic meds.

Lindsay Wong grew up with a paranoid schizophrenic grandmother and a mother who was deeply afraid of the “woo-woo” - Chinese ghosts who come to visit in times of personal turmoil. From a young age, she witnessed the woo-woo’s sinister effects; at the age of six, she found herself living in the food court of her suburban mall, which her mother saw as a safe haven because they could hide there from dead people, and on a camping trip, her mother tried to light Lindsay’s foot on fire to rid her of the woo-woo.

The eccentricities take a dark turn, however, when her aunt, suffering from a psychotic breakdown, holds the city of Vancouver hostage for eight hours when she threatens to jump off a bridge. And when Lindsay herself starts to experience symptoms of the woo-woo herself, she wonders whether she will suffer the same fate as her family.

On one hand a witty and touching memoir about the Asian immigrant experience and on the other a harrowing and honest depiction of the vagaries of mental illness, The Woo-Woo is a gut-wrenching and beguiling manual for surviving family and oneself.

What listeners say about The Woo-Woo

I made myself late for several appointments because I couldn't stop listening. It's a memoir about a Chinese family that has really extreme mental issues -- but they don't believe in western medicine and think their craziness is because of ghosts. This book is also HILARIOUS. I lost count of how many times I laughed out loud, thanks both to the writer Lindsay Wong, and the narrator Eunice Wong, who does an amazing job. Especially loved the voice of the father and the (crazy crazy crazy) grandmother. Eunice Wong really does the book justice by making you crack up one minute and then the next you're either horrified or heartbroken at this family. I don't know how there could be a sequel, but I would really like there to be one! (I did a little internet sleuthing, and The Woo Woo was nominated for the Hilary Weston prize, which is Canada's biggest non-fiction award. It's a seriously good book. And this is a seriously good performance of it.)

Crazy book written by a crazy woman. Rambling,unconnected thoughts of what must have been and still is a hellish life. You cannot tell in the book whether the author is six or twelve or twenty years old; whether the aunt is alive or dead; whether the mother is living at home or in a mall. I pray for her that she will continue to seek help from qualified doctors and eventually lead a more normal life. I’m thankful that she didn’t choose an academic career because I would fear the consequences of her influence on students. How she ever attained any degree is beyond my comprehension. Truly a pitiful attempt to describe a horrifying condition. Sounds like she may have suffered too many brain injuries.