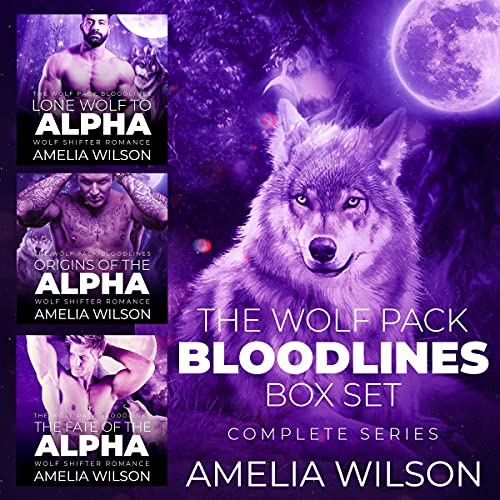 By: Amelia Wilson
Narrated by: Samuel Deeter for HotGhost Productions
Try for £0.00

“Sometimes, you never know what is lurking in the shadows of the past.”

There are more to shifters than meets the eye. They have an insatiable appetite for life, and an even more powerful urge to mate. But for Kayla, she hasn't even begun to scratch the surface of who she is. That is until she finds herself stranded in a small village in the middle of winter with a broken heart and busted car.

But Kayla is the kind of person who knows what she wants and has no problems taking it. It doesn't matter if it is male or female, when she sees something she likes, she grabs it. Her recklessness and lustful desires pull in those around her. But the secrets from her past are coming back to haunt her. Secrets that where kept from her since birth. Secrets that reveal her true powers.

But the more Kayla learns about herself the more she fears falling in love with the mysterious stranger Nate who is just as much of an animal as she is. Can he tame her wild heart and turn the lone wolf into the Alpha? Or will matters of the heart tear their relationship apart?

Sink your teeth into the Wolfpack Bloodlines and get a taste of real loyalty and love as Kayla takes her destiny by the fangs.

All three audiobooks in the series are included in this set.

I'm so glad that this is a box set, the books are written well and read perfectly for the story lines. It is a series that you want to go from one book to another would recommend.

great series,I didn't want it to end, loved the story line and the narrator

I’m glad that I got the box set as this was a really fast paced set of novels, and it was good for the momentum to just keep going. There was some really interesting twists and turns and I loved that there were no real slow parts. Will definitely have to check out more of this authors Books

I really enjoyed this shifter series. I will say in the last book not trying to spoil anything but there is a kinda cheating involved but out of their control cheating but cheating nonetheless. I knows its a trigger for some so thought I would put it. I did enjoy the story audit kept my attention throughout. The narrator does a great job. I was given this free review copy audiobook at my request and have voluntarily left this review.
AudiobookObsession
AudiobooksUnleashed

The storyline flowed smoothly. An intriguing story a little more dark than expected. What is reading and definitely need the whole set. I was not as impressed with the narrator I think it would’ve been better to have a male and a female narrator.

This series was not for me!

This series definitely needed a female and male narrator. Amelia Wilson describes the male shifters as young, strong, and sexy, however the voice given to these characters by Samuel sound like very old southern men that didn’t come across as sexy, whatsoever! Kayla was the main female shifter and was described as young, sexy, and full of moxie, but again, Samuel made her sound like a young boy!

Unfortunately, due to the terrible narration this entire series was a disconnect for me. Also, the sex scenes were so raunchy and with the total disconnect on the voices, I found myself just fast forwarding through them.

Honestly, it was a struggle to finish this series!

i wouldn’t recommend this ever.

this is more adult content not for children plus the content read is uncomfortable…
plus it’s more sexual then story. gross

This is a set of 3 Books that all center around Kayla and her unexpected stop in a small mountain town that ends up meaning more then she ever expected.
It has mystery, heat, shifting, Love, and a little possession from the underworld.
Nicely Done!
Heads up, book 1 has FMF action.

not a good one

With this being a new author to me, I am in awe of how awesome this boxset is!!! I am in need of more! Love how the story is so intense and full of excitement that leaves you gripping the edge of the seat

I enjoyed the books. They were short and sweet but with a lot of information. The characters were okay. There wasn't a whole lot of depth to them but I knew who they were and why they were there. There was quite a bit of sex I would say a third of it is sex. That's something to consider if you decide to read it.

The narrator did a good job and i would recommend the books.

These three stories tell the story of a lone wolf who finds her pack. Kayla doesn't know she's a wolf shifter so when she finds her pack she learns what it's like to have a place to belong. There is hot steamy sex, fights for survival and a murder mystery.
I was given this free review copy audiobook at my request and voluntarily left this unbiased review.

The books are full of drama, romance and suspense, Very fast paced, 3 book series and I recommend reading in order.