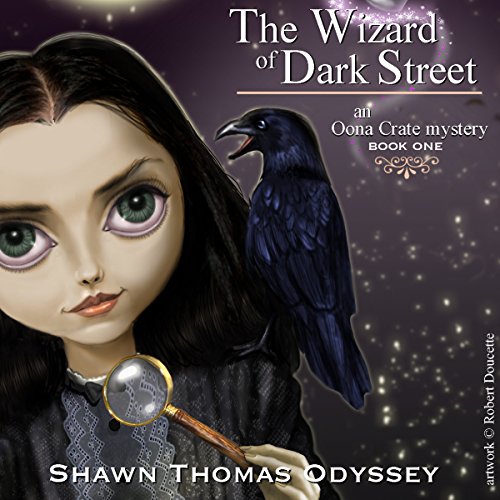 The Wizard of Dark Street

Oona Crate was born to be the Wizard's apprentice, but she has another destiny in mind.

Despite possessing the rare gift of natural magic, Oona wants to be a detective. Eager for a case, she wants to show her uncle - the Wizard of Dark Street - that logic is as powerful as magic. But when someone attacks the Wizard, Oona must delve even deeper into the world of magic.

Full of magic, odd characters, evil henchmen, and a street where nothing is normal, The Wizard of Dark Street will have you guessing until the very end.

What listeners say about The Wizard of Dark Street

Oona Crate is a natural magician and the magician's apprentice, living in Dark Street, a divorced part of the land of Faerie. The magician, her uncle is the guardian of the gate between the land of Faerie and the real world. But what happens if a lot of dresses gets stolen from the boutique in Dark Street and culminates in the abduction or maybe murder of her uncle through magical means?

Oona, who have just relinquished her position as the magician's apprentice, are given a chance to solve the mystery in true Agatha Christie style. Oona gets a chance to be a real detective.

Shawn Thomas Odyssey applies the old recipe of a murder mystery to the fantasy drama. In the end the question is if you as listener can figure out who is the criminal. It is almost as if you are playing Cluedo using Audible. The surprises in the end are few, but the idea is intriguing. Furthermore, it must be said that the book probably has a adolescent reader and listenership in the eye.

Shawn Thomas Odyssey does a marvellous job when reading his book.

If you have read all your Agatha Christie mysteries and yearns for more, don't fear Oona Crate is here!

Our protagonist, Oona Crate, is smart but troubled by tragedies in her past. She has clever helpers, a crow who carries all the world's knowledge in it's scattered brain, and an elf.

She lives on the border between our world and fairyland. She has a dilemma to face - to go on developing her talents as a wizard or become a detective which she dearly desires.

This is the story of how circumstances force her to face her fears and move forward. A wonderful growing up story, told charmingly.

The story is fresh, original, and convoluted enough to make it a satisfying mystery.

A fun read, entertaining and for all ages

Although the intended audience for this book is for the YA market I found it a fun read, entertaining and interesting enough to hold my attention from start to finish and I'm in my early 60's

Oona is an incredibly likeable and well rounded character, as is Deacon her enchanted raven sidekick, some of the other characters are less rounded however and whilst it does not spoil the overall story it would help flesh out this fantasy world if some of the other characters had a bit more depth behind them. That is not to say that it is in anyway hard to find your self becoming immersed in the fantasy world of Dark Street as it stands.

I am normally wary of books narrated by the author but I found his narration to be well suited to the story and will definitely listen to more of this series.

The only qualm I had with the story was that 12 year old children were expected to sign contracts that in this universe were legally binding and that Oona seems much older than her 12 years . . . but these did not detract from my enjoyment of this book.

What made the experience of listening to The Wizard of Dark Street the most enjoyable?

Most of the time I don't care for the author narrating their own books. However, I can't imagine anyone else reading The Wizard of Dark Street. I had a slight problem getting into the story but never considered not listening to the book because of Shawn Thomas Odyssey's narration. His reading of this book is delightful. I couldn't stop listening to his lilting voice and telling of this tale. He brought the characters to life like nobody else could have. Once the story was set up, I couldn't wait to find out what was going to happen next. I highly recommend this book for adults who like books such as the Harry Potter series as well as young listeners.

I loved Oona. She had so many layers and such enthusiasm for life. I also enjoyed Adler very much. He had heart and character and the accent used by Shawn Thomas Odyssey for him was always fun to hear.

What about Shawn Thomas Odyssey’s performance did you like?

His delightful accents and bringing the characters to life.

Amazing story! Reader takes some getting used to

At first I did not believe I would like the story, you may feel that way too, but give it a chance. It quickly becomes addicting and leaves you smiling. I look forward to the second book and even look forward to hearing the author reading it. The author is the narrator and I'm still not convinced that was smart on his side. At first it sounded as if the narrator was speaking too far from the microphone or that the sound quality was off, but I learned to ignore this and enjoy the book. I hope you will too.

Where does The Wizard of Dark Street rank among all the audiobooks you’ve listened to so far?

I loved it. It was a very fun read. I'd rank it right up there with Harry Potter.

My favorite genre is fantasy, especially stories with magic and adventure. The idea of a magical street between New York and The Land of Faerie is very engaging. I also really enjoyed the characters and the interesting way they interacted with each other.

What does Shawn Thomas Odyssey bring to the story that you wouldn’t experience if you just read the book?

The character voices were very entertaining. I've worked in school libraries where I've read to students daily. They always seemed to really enjoy it with character vocalizations. It is almost like eavesdropping on the characters themselves.

Step onto Dark Street and step into a magical world between worlds.

I would definitely recommend it to anyone, child, teen, or adult, who enjoys a magical fantasy adventure.

Some young adult books do a great job of trancending their young adult target market and being enjoyable reading for adults too; the Harry Potter series and the young adult books written by Neil Gaiman come to mind. Unfortunately I really can't recommend this book for adult readers. That being said, I think that younger readers will enjoy this book.

This book was an charming magical mystery. I would recommend it to children and whimsical adults. The reading was wonderful as well!

What did you love best about The Wizard of Dark Street?

Excellent concept with some of the best character development I have seen since the early Potter books! The story is imaginative, riveting and fun from page one.

Each character was unique and intriguing. Oona and her Raven, Deacon, are an excellent duo!

What about Shawn Thomas Odyssey’s performance did you like?

Not since Jim Dale have we been so entertained! Shawn Thomas Odyssey is a family favorite. The kids listened to this story, then completed the second book, and then went back to book one! Great for family story time and road trips.

The tragedy in Oona's early life was very grim to be sure, but my family is convinced their is still hope (this book is about a magical place after all) and they are impatient for the third book... Mr. Odyssey, PLEASE HAVE A THIRD!

A Fun listen, even for a considerably older than young listener. Silver hair and all!