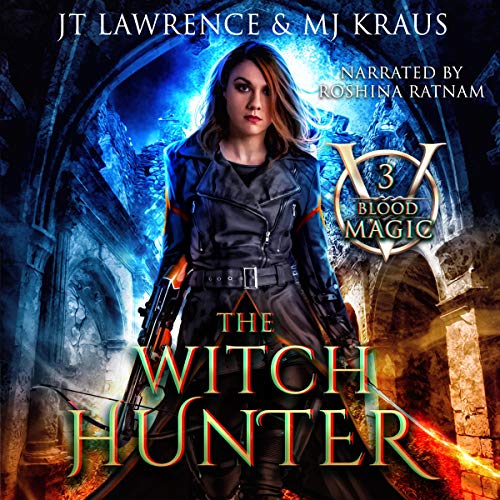 By: JT Lawrence,MJ Kraus
Narrated by: Roshina Ratnam
Try for £0.00

Is there ever a good time to face an old enemy?

Everyone knows that witches have a flair for melodrama, and Jax has enough to deal with, without babysitting her old arch-rival, Isadora Crowe. But when the StarDust Coven bodies start showing up, Jax begins to believe that the High Priestess’s jeopardy is real.

To add to the detective wizard’s unease, the band of Hammerskins are becoming more ruthless by the day. It’s just a matter of time before they seize power and raze the Realm.

There’s also a brand new magical drug on the market. It’s dangerous, highly addictive, and may be manufactured by vampires. But why? And what is their plan?

Jax’s investigating will push her past every hard limit, including an encounter with a charming vampire she’d do anything to forget.

Dodging savage orcs and wrecking vampire plans, Jax has to race to save Crowe. She finds herself caught in The Witch Hunter’s crosshairs.

When it comes to witches, though, nothing is ever quite as it seems.

Fans of The Dresden Files and Jessica Jones will burn through this addictive urban fantasy series.

What listeners say about The Witch Hunter

Life is never easy for Jax

Whilst trying to save her enemy from school from a psycho witch hunter Jax has to fight off Vampires and Orcs as well.
Life never goes to plan for Jax I just love how she shoulders it all and gets on with what’s thrown at her .
Roshina is perfect at the narration as usual and I love that her English accent sounds like it should.

another fantastic audiobook in this series. well written by JT Lawrence and MJ Kraus and great narration by Roshina Ratnam xxxxx

Out of this world

Story is excellently written. The narrator brings the story to life beautifully. Thank you for a beautiful experience.

An action packed story that manages to keep your interest from the start to the finish and makes you want to get into the next book immediately. The characters are interesting and unique.

I have very much enjoyed this series. The author threw a curve ball into the story as well. I thought sure I knew where certain characters were going in the development, and that is great to see. The action has continued to develop and everything has kept my interest piqued. My only irk is the length of the books, @ 5 hrs, is just way too short for me.
Thank you for writing this story.
I was given this free review copy audiobook at my request and have voluntarily left this review.

On to the next!

The story continues with Jax having to help a childhood bully. She’s better than me because I wouldn’t have helped my nemesis.

It was a good story. The narrator has a wonderful voice and keeps you engaged in the story. On to the next one!

Great book. Action packed and lots of fun. The narrator is amazing! off to the next.

And so I reach the end of my ARC; I keep feeling that the authors can't decide to make this more like the silliness in Harry Potter or the grittiness in Harry Dresden and they just make a mash of everything, While the story is entertaining enough, I don't think that I will continue in this series; I just could not connect with any of the characters to care enough about what happens to them and the world building was not good enough to fascinate me at all. YMMV