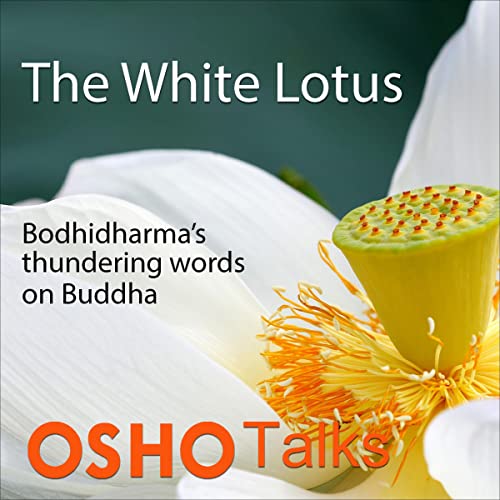 Do you see the meditativeness of the trees surrounding you? Such stillness! Just as you are listening to me, they are listening to me, not even a leaf moving. The birds are singing. The whole universe is still and yet a song... silent, yet musical. A tremendous harmony permeates everything. From the grass leaf to the greatest star, it is the same law.

Buddha’s message was carried by Bodhidharma, although there was a thousand-year gap between the two men, but not even a single moment’s gap, in reality, in truth. While Buddha was a very cultured man, very sophisticated, very graceful, the son of king, Bodhidharma is a wild lion. We learn that enlightenment comes in all facets, and he is definitely an outlandish enlightened one who was able to tell ordinary people of his time what Buddha meant.

The fragments discussed in this book were found just at the beginning of the 20th Century. They were excavated by M. A. Stein from Tun-Huang – they are notes from some unknown disciples of Bodhidharma. They consist of a question by a disciple and the answer by Bodhidharma. – the disciple asking, the master responding simply, bluntly, in his own matchless style.

And now – fifteen hundred years later – Osho takes Bodhidharma’s thundering words and transforms them into a message for now, for the 21st century. And just as Bodhidharma answers a disciple’s questions, in alternating chapters, Osho responds to modern-day seekers’ questions.

1. Dharma Lives in You

2. The Buddha within You

3. The Key to all Mysteries of Life

4. The Highest Flight of Human Consciousness

5. Finding Wisdom in Each Moment

6. An Innocent Man Has No Principles

7. The Essence that Answers all Questions

8. Drop the Hope and See a Miracle

9. Life Is Energy Dancing for No Purpose

11. It Is Only Experience that Liberates

OSHO TALKS - from original recordings of live events with Osho and his audience of seekers and friends from around the world. Recorded at the Osho International Meditation Resort, Pune, India.

What listeners say about The White Lotus