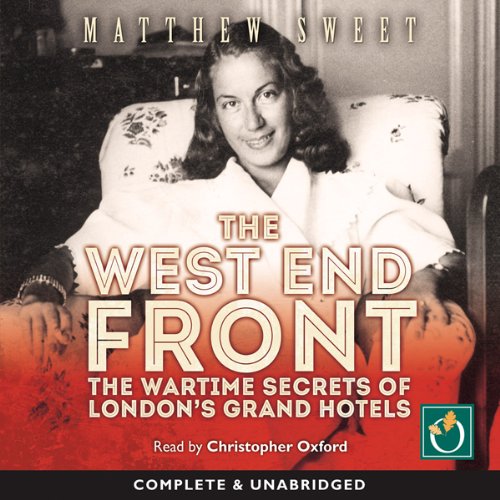 It’s the Second World War and the Savoy, the Dorchester, and Claridge’s teem with those determined not to allow Hitler to impact on their way of life. Spies: Meet Marie-Jacqueline Lancaster, the woman from M15 who has the gravy browning licked from her legs by Dylan Thomas. Royals: Meet Crown Prince Alexander of Yugoslavia, born in a suite at Claridge’s that was declared Yugoslav territory for the night. Players: Meet Joyce Stone, whose husband leads the band at the Dorchester.

West End Front is a witty and eye-opening account of the extraordinary events that unfolded under the reinforced ceilings of London’s grand hotels.

Stunning. An absolutely INDISPENSABLE work, written so beautifully and read with elan and charm. 10/10

I expected this book to be filled with amusing stories of goings on both up stairs and down stairs during the war. It wasn't that at all. Each chapter had a main character with a story to tell of war life that involved either Claridges, The Dorchester, The Ritz or The Savoy.

Once I got over my disappointment that I wasn't going to be spending the time being amused I actually really enjoyed the interesting stories being told of the communist storming of the Dorchester and the post war strikes at the Savoy or the gay bar in the basement of the Ritz.

Through it all the duchesses continued to stay in their suites often even during the air raids and ate very well in the dining rooms - purchased food wasn't on coupons and was dependant on availability so pheasant and quail and woodcock continued to be roasted and eaten by the rich.

An interesting book with some humour but most of it was exhibiting the typical stiff upper lip stuff that went on during the war.