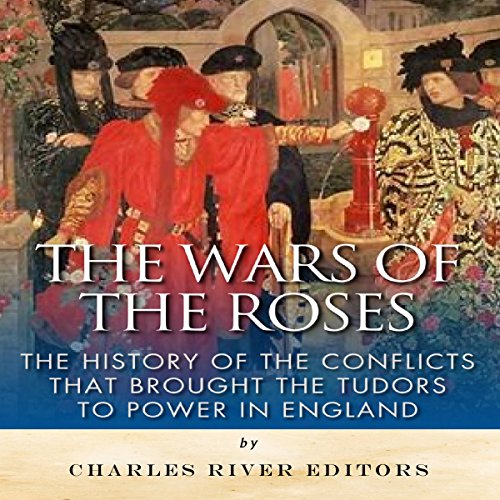 The Wars of the Roses

The History of the Conflicts That Brought the Tudors to Power in England
By: Charles River Editors
Narrated by: Paul Bloede
Length: 1 hr and 13 mins
Categories: History, European
3 out of 5 stars 3.0 (1 rating)

The Wars of the Roses

"King Edward told me in all the battles which he had won, as soon as he had gained victory, he mounted his horse and shouted to his men that they must spare the common soldiers and kill the lords of which none or few escaped." (Philippe de Commines)

Today, roses are a sign of love and luxury, but for over 30 years they provided the symbols for two houses at war for control of England. Thousands of people died and many more were injured fighting beneath the white rose of York and the red rose of Lancaster, and the noble families ruling England tore each other apart in a struggle that was as bitter as it was bloody. Though what followed was a period of strong rule under the Tudor monarchs, it ultimately came at a terrible cost, and even then it was through Elizabeth of York that the Tudor line received its legitimacy. After all, while Henry VII won his throne in battle, Elizabeth of York was the daughter of King Edward IV of England, a Yorkist monarch.

Despite their limited social and economic impact, the political and personal dramas of the Wars of the Roses have ensured that they are well remembered and still part of the popular imagination. The most famous depictions of the period came from Shakespeare, whose earliest plays included Richard III and the three parts of Henry VI. Naturally Shakespeare dramatized the tensions of what he presented as hugely destructive events, and his account, which showed the damage done by corruption and weak rule, and which turned Richard III into a popular villain, aimed to please the Tudor dynasty still in power at the time. Of course it also played to a popular interest in high drama and the sort of personal and political conflicts that lay at the heart of the war.

Could this topic be made any more boring?!

More animated narration would have helped.

What could Charles River Editors have done to make this a more enjoyable book for you?

More focus on the interesting parts, and the people, not just battle after battle

Would you be willing to try another one of Paul Bloede’s performances?

If you could play editor, what scene or scenes would you have cut from The Wars of the Roses?

It's not a matter of cutting, so much as it is a matter of reshaping the book to emphasize the most interesting parts, and to focus more on people less on the progress of the war

I like most of the Charles River offerings, but not this one!!