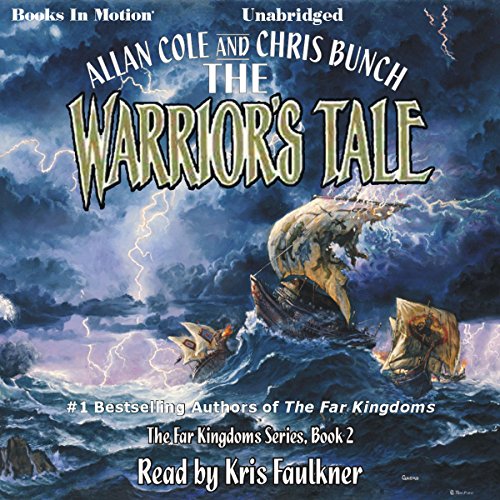 By: Allan Cole,Chris Bunch
Narrated by: Kris Faulkner
Try for £0.00

Captain Rali Emilie Antero came from an illustrious family of traders, wizards, and adventurers. But Rali cared little for magic, and even less for journeying. She was a soldier, captain of the elite Maranon Guard, staunch defenders of the majestic city of Orissa. But her family legacy was about to catch up with her. For the Guard's latest mission was sheer suicide: a sea-going odyssey in search of an evil master wizard–the last Archon of Lycanth–who had fled with a secret doomsday spell that could destroy all of civilization. It would be Rali's greatest challenge: a desperate pursuit, raging across the great Western Sea to the fire reefs that marked the end of the world–and beyond, to places unmarked even in legend. But only in the uncharted territories of her own soul–and the heritage of the Anteros–would Rali find the power to defeat the Archon and return to Orissa in triumph.

What listeners say about The Warrior's Tale

Well, the narration is bothering me so much that I don't know if I can finish the book. The narrator reads with a totally weird rhythm. She hurries through most of a long sentence only to make a totally unnecessary and weird pause in the middle of nowhere. I assume it's because she ran out of breath. Or, she'll start with a weird dramatic pause but the rest of the sentence then shows that all the drama was for naught. Example: "The man [pause pause pause] tipped his hat and spat on the ground". Eh?? Why pause dramatically before a hat tipping???!!!! And then there's weird emphasis on words that don't merit emphasis in a sentence that doesn't merit emphasis either. Example: "I tried [pause] with ALL my might and then a door [pause pause] OPENED in my mind". Ok, a door opened, big deal!! I'm so frustrated with this, it's very exhausting to listen to because the narrator essentially misleads me all the time. I don't know if I'm explaining this very well.

about the plot, I read reviews by men who complain about how all the men in the book are evil and get slaughtered by the women over and over. Also some guy complained that the sex scenes are gratuitous and intended for lesbians only. I don't understand why he would think that, I'm on hour 6 and there was one dream/memory where the sex was described in exactly 1 single, not overly long sentence. Exactly one, I counted very carefully. Maybe the remaining hours of the book will be filled with meaningless gratuitous lesbian sex, but so far there's no such thing. One thing that is kind of taxing is how often the men's disrespect for the women is described, over and over, it does feel like the authors are trying to bias the reader to sympathize with the women, but it feels a bit overdone because it's very noticeable. I feel like I'm being lectured.

I give it 3 stars because I'm ignoring the narration. Otherwise the narration would bring this down to 1 star.

Just couldn't get into it, the narration drones a bit, and the story jumps around to much without explaining to the audience what is going on.