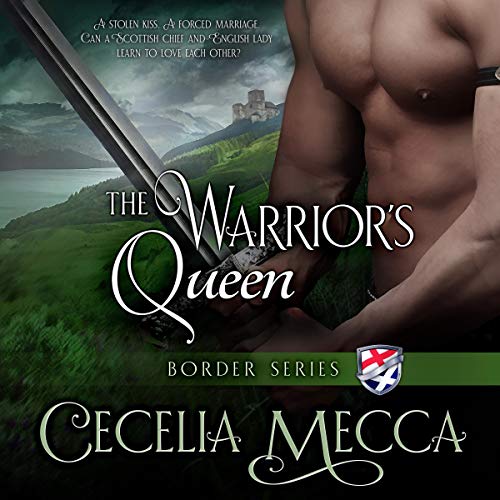 A stolen kiss. A forced marriage. Can a Scottish chief and English lady learn to love each other?

The Warrior - After two rejected proposals, Graeme de Sowlis has no interest in marriage. The Scottish clan chief would much rather preserve his heart and focus on promoting peace along the increasingly contentious border. His best-laid plans change when he accepts an invitation to a May Day celebration at Kenshire Castle in England. When he's caught in a stolen kiss with the May Day Queen, his integrity requires that he marry her.

The Queen - Gillian Bowman is so eager to please her father, she's agreed to marry the ancient Earl of Covington to save the family manor. Though she has every intention of doing just that, curiosity drives her into the arms of a handsome Scottish chief. When they're caught and forced to marry, she's horrified. The Earl of Covington has the ability to ruin her family, and her new husband seems reluctant to open up to her outside of the bedroom. Can love bloom from such humble beginnings?

What listeners say about The Warrior's Queen

Another 5 stars for this book too.
Narrator was brilliant as always.
Love this series. will definitely be listening to it again.

Wonderful story read it once. listened to it twice. A one story really enjoyed the hero and his lady.

As with any Miss Mecca 's novels, this was awesome!!!!!!. I hope to hear more of her novels while I work. That you for writing such great border /lowland Scottish/English historical romances.

I've listened to audiobooks for years. I use them as incentives to go to cardiac rehab (oh boy - I get to listen for an hour at the gym!) and to keep me company while driving - especially nice when I was driving two hours a week to my mother's nursing home. However, this is the first time I stayed up two hours past my bedtime to finish an audiobook.

I like to "read" series in order. i had read previous Border Series books on my Kindle, but got a chance for a review copy of an audiobook. Tim Campbell did a wonderful job. Voices were distinct, accents were good but still understandable, and the hero's voice was deep and sexy (just like a good hero's voice should be).

I enjoy the trope of good people forced into marriage by circumstance, and how they cope and come to love each other. It's always nice seeing old friends from previous books show up. Graeme de Sowlis could not catch a break in earlier books, so it was nice for him to to have his turn. It's a turbulent time and location - perfect for all sorts of drama.

I liked Graeme's self restraint after he married Gillian!! High angst and slow burn. I think Gillian and Graeme frustrated themselves just as much as they frustrated me! smh! Communication faux pax nonstop!!!!Graeme is magnanimous to the end!! I voluntarily listened to a free copy of this story and am giving an honest review. The narrator did an excellent job with voices, expressions, and accents. Kudos.

This was another great audio book narrated by Tim Campbell. I always look forward to listening to the audio books that are narrated by him. He seems to being the characters to life with the emotions he puts into his narration. His narration with Cecelia 's words in this book were a great combination!

Entertaining and very easy to listen to. I'll have to get the rest in this series.

grahm a Scottish warrior, spies a beautiful woman while visiting an English friend during May Day festivities. Julian was betrothed to another English lord she was not happy about.
she is chosen as the May Day Quees and is later caught in a compromising position with Grahm.
I loved the story and how it came together. everything works out for everyone in the end. beautiful story to listen to.

I think Graeme deserved better. Jillian wasn't my favorite. She was a bit boring and self centered. Graeme is such a good guy I just feel Jillian didn't do him justice.

Finally we got Graeme's story!!!

I loved Graeme from the day we met him and felt sorry for him everytime he was turned down by a woman he wanted to marry. Reading his story now makes it clear that none of those women were actually right for him. Miranda is what he needed. Sometimes I just wanted to slap him for his self-doubts. In the end, he turned out to be my favorite. Thank you, Ms. Mecca, for another great story from the border. I highly recommend the whole Border Series to everyone who likes Scottish and English historical romance. As for the narrator - I love Tim Campbell's voice and could listen to him forever. He is absolutely perfect for this series.

One of my favorites from border series

I loved Graeme and Gillian’s story. He is my second favorite male character in the series. He finally found his hea in Gillian and same goes for her. But I’ve been rooting for Graeme “the nice guy” to be happy. A forced marriage story between England and Scotland. I really love Tim Campbell’s narration as well. He is definitely a favorite of mine now! I would recommend this book to anyone who enjoys Scottish border historical romances.