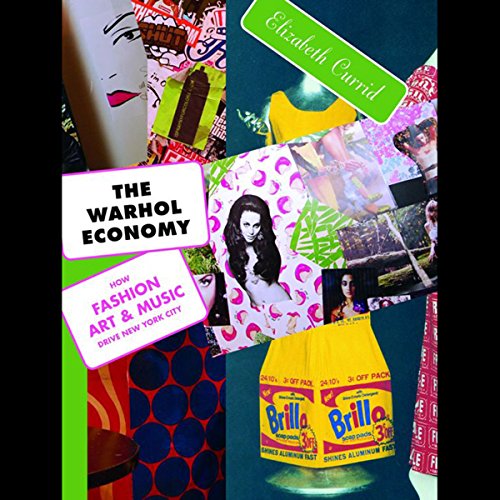 By: Elizabeth Currid
Narrated by: Jennifer Van Dyck
Try for £0.00

Though a dissertation on the finer points of urban planning perhaps usually would not be viewed as light reading for a general audience, Elizabeth Currid's surprisingly entertaining and accessible fresh take on the sparkle of New York City is the exception to this rule. Armed with a wide variety of data needed to destroy the increasingly outdated notion that Wall Street should get all the credit for making New York the thriving metropolis it is, Currid's manifesto on the contributions of culture and nightlife is energetically delivered in the voice of Jennifer Van Dyck.

Van Dyck blends gossipy demystification of the city's network of creativity with a graceful assurance that comes from knowing all facts point to Currid's conclusion. There is no alienating terminology here. The author weaves an intricate and intimate portrait of New York's real foundations by culling the best moments from her series of interviews with bizarre and famous artists who are indisputably in the know. From graffiti artists to fashion designers to rock bands, Van Dyck renders these colorful characters and amusing anecdotes with a scientific simplicity, validating the conclusion they drive home again and again.

Currid's reevaluation of the matrix of social and creative connections that is truly responsible for making New York one of the greatest cities on earth ends with a series of concrete suggestions for policymakers interested to preserve this rich cultural heritage, or at least stop stomping it out. Van Dyck explains these recommendations with an appropriate dose of bitterness stemming from the harsh reality that those greedy and inept tycoons receive billions in bailout funds while an iconic taste-making club like CBGB is allowed to perish without the slightest helping hand from government. There are many various reasons this book is worth a listen: whether you're looking for the cutting edge in urban planning, or you like to hear glamorous tales of who knows who and how, or you just love New York City, Van Dyck's narration of Currid's excellent cultural treatise will not disappoint. —Megan Volpert

Which is more important to New York City's economy, the gleaming corporate office--or the grungy rock club that launches the best new bands? If you said "office", think again.

In The Warhol Economy, Elizabeth Currid argues that creative industries like fashion, art, and music drive the economy of New York as much as - if not more than - finance, real estate, and law. And these creative industries are fueled by the social life that whirls around the clubs, galleries, music venues, and fashion shows where creative people meet, network, exchange ideas, pass judgments, and set the trends that shape popular culture.

The implications of Currid's argument are far-reaching, and not just for New York. Urban policymakers, she suggests, have not only seriously underestimated the importance of the cultural economy, but they have failed to recognize that it depends on a vibrant creative social scene. They haven't understood, in other words, the social, cultural, and economic mix that Currid calls the Warhol economy.

With vivid first-person reporting about New York's creative scene, Currid takes the listener into the city spaces where the social and economic lives of creativity merge. p>The book has fascinating original interviews with many of New York's important creative figures, including fashion designers Zac Posen and Diane von Furstenberg, artists Ryan McGinness and Futura, and members of the band Clap Your Hands Say Yeah.The economics of art and culture in New York and other cities has been greatly misunderstood and underrated. The Warhol Economy explains how the cultural economy works-and why it is vital to all great cities.

"Of course, everyone knows that art and culture help make New York a great place to live. But Currid goes much further, showing that the culture industry creates tremendous economic value in its own right."(James Surowiecki, The New Yorker)

What listeners say about The Warhol Economy

There's No title's for expression's of arts 🎨!

I am not sure what was missing. A better reading? Better content? More compelling argument? Maybe it was all of the above. This might be better as a lazy Sunday paperback read. But I would probably recommend just skipping over it in audiobook form.

Excellent material for anyone who dabbles in art or cultural production. Brilliant, well synthesized stats and observations pepper this entire book. If you're interested in a comprehensive understanding of the relationship between economy and culture, this is a great jumping off point.