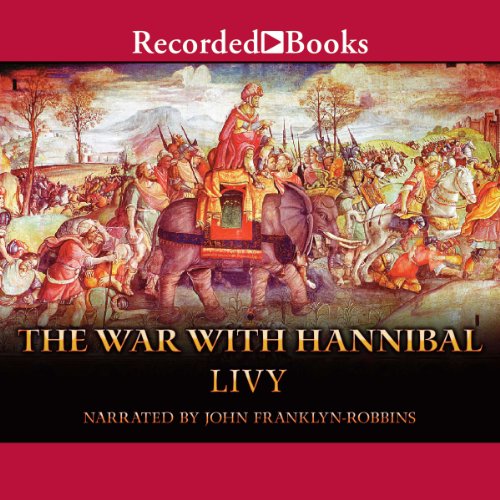 The War with Hannibal

Before General Patton, Napoleon Bonaparte, and Ghengis Khan there was Hannibal. By the age of 26, he had assumed the role of leader of the Carthaginian forces. As documented by the Roman historian Titus Livius (Livy), and performed here by veteran narrator John Franklyn-Robbins, Hannibal became one of the greatest military leaders of his time. In The War with Hannibal, Livy details Hannibal's attacks around the Mediterranean shores and what became the Second Punic War. This audiobook provides valuable and rare access into one of the best military minds in history.

Hannibal’s military campaign against Rome inspired its citizens with the same panic that would later terrify Europeans beset by Mongol invaders from the East. A sworn enemy of Rome, Hannibal succeeded as leader of the Carthaginian forces at the age of 26, following the death of his brother-in-law Hasdrubal. On joining his troops, Hannibal launched an attack on the Roman-held city of Saguntum, beginning the Second Punic War and a process that seemed almost predestined as his army swept like a scourge round the Mediterranean shores. Though credit is due to the wisdom of Carthage’s leaders and the loyalty and efficiency of its troops, the larger share must be given to Hannibal, a leader and strategist equal to any the world has known.

What listeners say about The War with Hannibal

Would you listen to The War with Hannibal again? Why?

I enjoyed this book, but it's a condensed version rather than unabridged as advertised. The reading was excellent, and the excerpts included were well-chosen. Still, I was annoyed to find that this was a