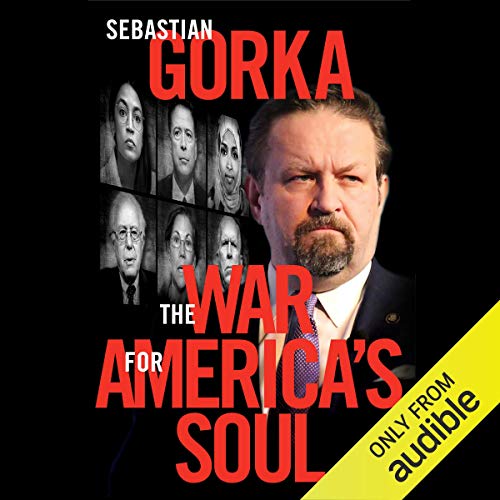 The War for America's Soul

“Take it from someone who has been on the inside, who understands the fight we are currently in, and who knows what must be done to save our country. Dr. Sebastian Gorka’s latest book, The War for America’s Soul, leverages the former White House strategist’s expertise, driven by his determination to preserve what made America great in the first place.” (Mark Levin)

Our country is at war with itself. On one side are American patriots, dedicated to freedom under the Constitution; on the other side are leftists campaigning not just to win elections, but to radically transform the nation. In this political war for the soul of our country, America’s patriots need a strategist with a blueprint for victory.

Luckily, we have such a man in Dr. Sebastian Gorka - a former strategist for President Trump and now a nationally syndicated radio host and a fearless culture warrior.

In his essential new book, The War for America’s Soul, Dr. Gorka shows how America’s elite - in both parties - betrayed our heartland, sabotaged the American dream, and accepted national decline as inevitable. It took a candidate with remarkable vision, dauntless courage, and unbreakable determination to change the narrative. That man was Donald Trump. A candidate who owed no favors to special interests, Trump articulated a new American nationalism that has been an extraordinary force for economic and political renewal.

What listeners say about The War for America's Soul

it's so great to listen to the author of the book. Best book of the year!!!!

I have listened to a few of Sebastian Gorka's books and his voice is mesmerizing! To take a deep dive into what the last three years have been like and the guidance to really know how to look forward, I will have to listen over and over and write down the lessons learned!

very much enjoyed this book, Sebastian enlightens his listeners to what's really going on in America and the White House. Sebastian also gives Insight to other media outlets to keep yourself informed.

If you are left of or centrist politically, this is necessary oppo research.

If you are a middle-of-the-road American or just an inquisitive person concerned and wanting to know about US and global politics and how 2020 will effect the world we are leaving our kids, Mr. Gorka is an outsider with insider access and perspective necessary to reading the turn of the stitches on what is being pitched at you by what they claim is "The News"(TM). Erudite and accessible, and spot-on, point by point, Sebastian brings politics home, explains why our involvement and being wise as serpents yet gentle as doves is more critical than ever, and what to do about it! One point against:. the Appendix misses "Imprimis" from Hillsdale College.

A definite patriotic must hear

I kind of wish they could’ve had the president available to narrow his dialogue, but I can see why that’s not possible. Otherwise, though, but the resources they had, this is a pretty good book, and definitely shed some light and perspective on some things that I was not made aware of before. Definitely a must – read for any conservative and really any American, even any patriot of any country. Regardless of age, gender, race, creed, or value set, this book will be at the very least rather interesting to hear.

another excellent book by Gorka

Sebastian hits the nail on the head every time he puts his thoughts to paper or speaks. well researched and thoughtful analysis challenges the listener/reader. with riveting personal experiences as lessons, every American should read these books

He did it again. My only complaint is that it isn't longer. But I guess that's a good complaint to have. This was a great read. I can't wait for Mr Gorka's next book.

This is a book I will re-listen to again. So much info to get it all the first time.

This is my first Sebastian Gorka book, but Not my last, for sure.

I could listen to SG read a phone book and be happy. Usually not a fan of authors narrating their own books, but SG Did a wonderful job.

I found the book very interesting and glad I purchased.... Thank You Sebastian Gorka.

**** I don’t trust 5 stars reviews and never read them, so I rarely ever give them. Doesn’t mean it wasn’t an awesome book.

I bought Dr Gorka’s new book once he mentioned on his radio show it was available on Audible. I am so glad he personally narrated the book. The book has a great insight into the left and NT. Also, giving a brief history of how it is to be a modern day conservative contrasting what others sacrifice to get freedom like we have in America. I am so glad I bought this book. The bonus chapters are the best.

Probably one of the most important books today! Very concise. He does not ramble but HOLDS YOUR ATTENTION in a remarkable way. I learned so much! Highly recommend to anyone of either party. Know the truth. Listen to this book.