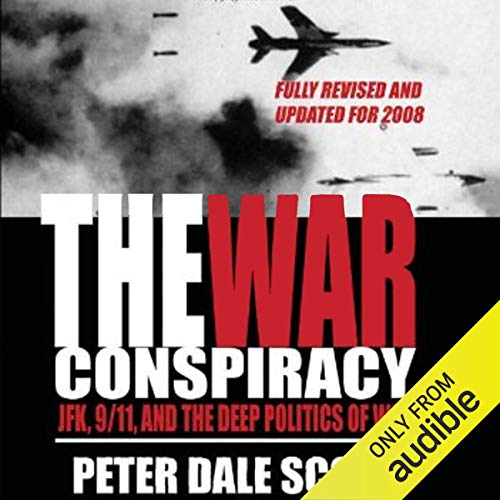 In The War Conspiracy, author Peter Dale Scott updates his original 1972 treatise on the assassination of President John F. Kennedy to include newly conceived similarities with the 9/11 terrorist attacks, as regards how both events immediately transformed the state of US foreign policy and military strategy.

Actor Noah Michael Levine performs with a strong, clear voice, which lends additional power to this fascinating work about the purposeful manipulation of public sentiment surrounding national tragedies, while Scott has a clear and authoritative tone which renders this work of political analysis a truly enjoyable and thought-provoking listen.

A remarkable analysis linking the assassination of JFK and 9/11, and how both events were used to influence war policy. Peter Dale Scott examines the many ways in which war policy has been driven by “accidents” and other events in the field, in some cases despite moves toward peace that were directed by presidents. This book explores the “deep politics” that exerts a profound but too-little-understood effect on national policy outside the control of traditional democratic processes.

An important analysis into the causes of war and the long-lasting effects that major events in American history can have on foreign and military policies, The War Conspiracy is a must-read book for students of American history and foreign policy, and anyone interested in the ways that domestic tragedies can be used to manipulate the country’s direction.

First published in 1972, this edition of The War Conspiracy is fully updated for the twenty-first century and includes two lengthy additional essays, one on the transition in Vietnam policy in the wake of the Kennedy assassination, and the other discussing the many parallels between that 1963 event and the attacks of 9/11.

What listeners say about The War Conspiracy

data dump on every rabbit hole

This book is a well researched data dump on every rabbit hole you can go down from the 50s to post 9/11.