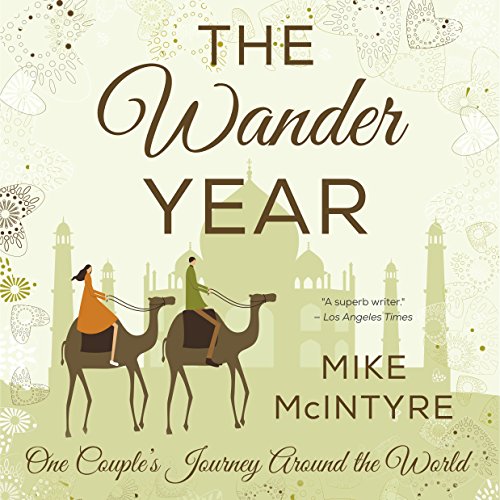 By: Mike McIntyre
Narrated by: Chris Brinkley
Try for £0.00

Mike McIntyre and his longtime girlfriend, Andrea, are in their early 40s and itching for a break. So they rent out their San Diego home - dog, cat, and furniture included - and embark on a yearlong journey around the world. "We're not out to find ourselves, or even to lose ourselves," McIntyre writes. "We're merely seeking a pause in our routines." But the couple is soon swept up in the adventure of a lifetime: trekking in the Himalayas, traversing the Sahara on camel, scrambling over the temples of Angkor, crossing the world's largest salt flat in South America, scaling a New Zealand glacier. The book recounts the odyssey in 48 dispatches from 22 countries. Among them: birdwatching in Indonesia, a haircut from Vietnam's oldest barber, touring a notorious prison in Bolivia, haggling over rugs in Morocco, on safari in Nepal. McIntyre taps his self-deprecating humor to convey the joys, perils, and frustrations of prolonged travel. When the couple ventures into a cyclone in Fiji on a rubber raft, he writes, "The absence of life jackets and paddles meant more room for our lunacy." And during a ride across India with a hired car and driver, he notes, "His passing technique was so precise, I could see my horrified expression reflected in the chrome bumpers of onrushing trucks." He also writes eloquently of such poignant moments as sleeping under the stars in North Africa, flying kites with a poor boy in Bali, and the death of a female tour guide in China. By journey's end, he's shucked much of his journalist's cynicism, and he stands in awe of a staggeringly beautiful world and the resilient souls who fill it.

The Wander Year is an expanded version of the popular series of the same name that ran in the Travel section of the Los Angeles Times.

What listeners say about The Wander Year

An uninteresting predictable account of two obviously American 'world travellers'. The rendition of their Indian experience is particularly deflating as you realise these are not the type of people who should even bother with Asia.
I get the impression the author has tried to temper the spoiled sense of entitlement they appear to have whilst being ferried around in rickshaws with the odd self deprecating comment, but it doesn't work for me.
These two are dull, and so are their stories.
I wish I hadn't wasted my money.

it is a travel memoir, and an unexceptional one. the narration is really quite aggravating.

Fun though I thought several words mispronounced, it was full of information and anecdotes for travelers.

Delightful audiobook. I don't travel, but but I thoroughly enjoyed my trip around the world with this excellent audiobook. The reader was very, very good!

Narrator was monotone and difficult to listen to. Interesting plot though to travel the world in a year.

I really love travel books but this one missed the mark for me. Not a lot if zing. Just so so. It might be worth it if it were on sale but I wouldn’t spend a credit on it.