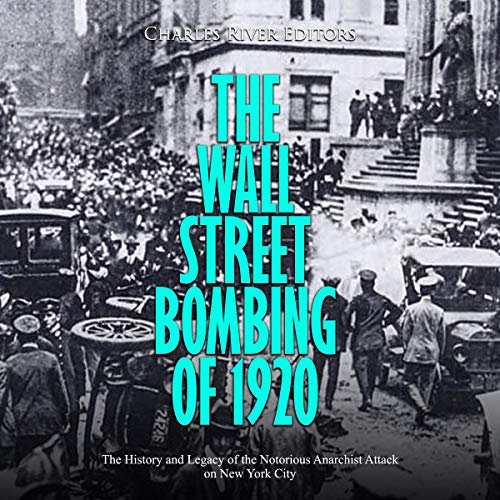 The Wall Street Bombing of 1920

The Wall Street Bombing of 1920

“As an anarchist, I am opposed to violence. But if the people want to do away with assassins, they must do away with the conditions which produce murderers.” (Emma Goldman)

One September day, New York City suffered a devastating act of domestic terrorism, but that day was not the 11th, and the attack took place over 80 years before the most notorious terrorist attack on America.

In 1920, an explosion in the financial district of New York City killed 38 people, injured hundreds more, and caused damage that is still visible on some of Wall Street’s most famous buildings today. Although the attack has largely been forgotten, in terms of casualties, it was the worst act of terrorism in the United States until the bombing in Oklahoma City conducted by Timothy McVeigh in 1995.

The investigation into the bombing involved 10 government agencies and extended across the world, yet after three years of intensive work, investigators were finally forced to admit that they had no idea who had planted the bomb. Subsequent investigations have uncovered many suspects, but no one was ever charged with offenses related to the explosion, even as suspicions have always fallen on anarchists and political activists who sought revolutionary change.

By 1920, the end of World War I had swept away the seeming stability of the pre-war world. In Europe, the Austro-Hungarian Empire fragmented into new nation states, Imperial Germany was replaced first by a communist state and then by the democratic Weimar Republic, and Italy was brought close to complete economic collapse and riven by divisions between those who wanted to see the replacement of the current regime with a communist state and those who struggled to enforce the status quo. Britain and France, though victorious, were crippled by the costs of the war, both economically and in terms of huge numbers of casualties. America emerged, for the first time, as a world power.

However, it was in Russia that the greatest changes were taking place. Though the October Revolution in 1917 is generally celebrated as the beginning of communist control in Russia, in 1920, a bitter civil war was being fought between the “Red” supporters of Vladimir Lenin’s Soviet Union and “White” forces who demanded the return of the tsar and the end of the fledgling communist state.

What is now often forgotten is that large numbers of American, British, and French troops fought on the side of the White forces, attempting to remove the Communist regime and to prevent the spread of communism outside Russia. In fact, in 1920, an American Expeditionary Force controlled large parts of Siberia and occupied the city of Vladivostok.

The end of the horrors of the Great War, the “war to end all wars”, seemed to presage the end of conflict itself, and for many people, communism seemed to offer something genuinely new and different - a real alternative to capitalism based not on the creation of wealth, but the sharing of control of the resources of a nation with its people.

Supporters extolled the virtues of communism with evangelical zeal, claiming that the new system would quickly spread around the world. Countries such as America, Britain, and France were viewed as being opposed to change, in general, and to communism, specifically.

Many countries also saw the rise of “anarchist” movements, sometimes affiliated with the communist cause and sometimes pursuing their own quite separate vision of a people’s Utopia. The one thing that all those who sought change agreed on was that this could only come when capitalism and the social, political, and democratic systems that underpinned it were removed.

What listeners say about The Wall Street Bombing of 1920