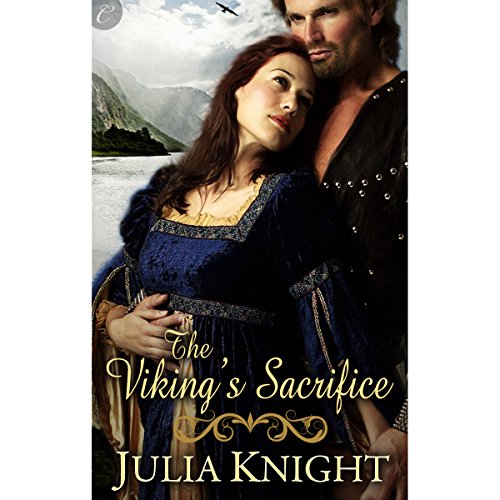 Viking raiders destroyed Wilda's home. She witnessed the murder of her mother and would have been killed herself if it weren't for the Viking boy Einar, who saved her from his ruthless brother. The blood and murder left Wilda cold and shorn of feeling.

Eight years later, the heathens return for Wilda. As a captive in the Viking village, she finds protection and silent comfort in the man who once gallantly saved her.

Einar has been cursed to silence by his brother. With the dark net of his brother's power cast over their village, silence is a small price to pay for his family's safety. But Einar is immediately drawn to Wilda, and the need to protect her from his brother awakens his Viking courage. Can Einar break his brother's curse in time to save the village and the woman he loves?

What listeners say about The Viking's Sacrifice

Where does The Viking's Sacrifice rank among all the audiobooks you’ve listened to so far?

In the middle of the pack. The story was beautifully delivered but the story itself could have used more tightening - a lot of repetition of the underlining themes!

Less repetition of key concepts (it's understandable for a few repetitions to happen, it just felt a little like beaten a dead horse in certain instances!). More conversation between the characters.

She gave incredible life to the characters and availed each one of them a very unique voice. This latter point is driven home most especially in the parts of the book where dialogue occurs between characters. This for me made an average story a more enjoyable experience because one was able to empatize and

What did you love best about The Viking's Sacrifice?

Think of this as a Viking version of Braveheart or Robinhood, but with an unspoken romance and huge sibling rivalry thrown in the mix. It has all the appropriate trimmings: an evil cruse, manipulation, lust, greed, religious confinement, but the real gems are in the gritty, raw invasion passages. The descriptive writing of the landscape transports you to the shores of old England and possibly Ireland. The female narrator does a fabulous job at choosing the right pace for the scenes, switching voices for characters, and pronounces the Norwegian names with aplomb. Amidst the brooding plot is perhaps the message that behind every triumphant male hero is an equally strong female heroine? This is the perfect thing for a long drive through the country!

What was one of the most memorable moments of The Viking's Sacrifice?

The tension between the siblings!

The initial invasion of the village where the seed is planted for romance and deception!

What did you love best about The Viking's Sacrifice?

The storytelling was wonderful. Ms. Cobb's narration was always engaging and helped to sustain my interest in this book.

Amanda Cobb is consistently charming and wonderful. Every performance is energetic and articulate - her narration drives the story forward. The detail she gives each of the characters is particularly noteworthy. I may have lost interest in this book if it weren't for Ms. Cobb's engrossing manner. She is a keeper - I hope to hear more from her soon!

The book was ok, but lacked more romance

The way Amanda Cobb read the book, did that I gave it a chance. And I do not regret. If you just want to sit back and enjoy a good story, this could be the book. I enjoyed it.

What other book might you compare The Viking's Sacrifice to and why?

I actually think this book is the first, i have listened to, which is about a kidnapped girl who is saved by another. It always used to be the kidnapper and the girl who falls in love with each other. So i can't compare it.

No this is the first book, but she did a great job. She has a pleasant voice to listen to.

Every time Einar being ridiculed by his siblings and people. And when his faithful horse is sacrificed.

Although the book was not quite as I expected, I was pleasantly surprised.
But I would not use a credit. Buy it when it is on sale.

The readers voice, use of tone

What was one of the most memorable moments of The Viking's Sacrifice?

What does Amanda Cobb bring to the story that you wouldn’t experience if you just read the book?

She really brought out the different characters

Toward the end, when they were on the run.

Truly wonderful (and believable) narration...I was so hooked! And seriously--what a fun story. I really couldn't be happier with this selection. Thanks!!!

Would you consider the audio edition of The Viking's Sacrifice to be better than the print version?

By and large I tend to enjoy the print versions of books more than the audio edition. That's because I hit a slew of bad narrators. For example David Eagleman's reading of

The narrator, her voice was perfect. She as a real good voice and her intonations are perfect. Could really distinguish the caracters.

What other book might you compare The Viking's Sacrifice to and why?

When Inar sees Wilda after she as been made a trall.

If you like viking love stories you will love this story a brave man give up everything to save the people and the woman he love the ending is truly happily ever after.