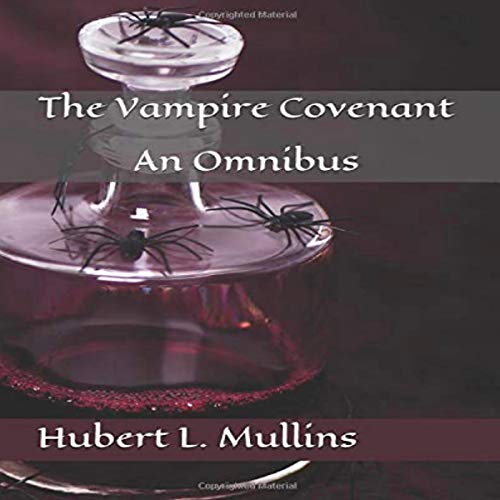 For the first time ever, the Vampire Covenant in one volume. Included in this omnibus is all three novels (The Vampires of Hope's Covenant, Rage of the Vampire, and War of the Vampire). Also included are short stories and a never before published sample of the upcoming prequel novel: The Birth of the Vampire: The Journal of Kersey Avonwood.

From the Vampires of Hope's Covenant:

In the far reaches of Mystyria lies Hope's Covenant, a small, coastal town at the foot of the world. Beneath a mansion in the outskirts, a powerful treasure is buried. A secret treasure. One that Dyne, a 300-year-old vampiress will stop at nothing to claim. With her vampiric army in tow, Dyne steps foot on the Birchlock Estate with Hannah, the small child she stole away from a torn family. But in Hope's Covenant, Tranas Anvaar arrives to bring justice to the vampiress - to make her pay for the lives she's destroyed. Once a peaceful man, Tranas now chases her across the world in an attempt to avenge his wife and daughter. But their meeting in Hope's Covenant is no accident. An ancient evil has brought them together. An evil that is trying to resurrect something long forgotten-something of true horror. Dyne and Tranas, immortal enemies, soon learn that they are merely pawns in a much larger game.

From Rage of the Vampire:

Kersey is afraid. After years of hiding away from Mydian, a vengeful god, she has been pushed to her limit - to her threshold of anger and resentment. A powerful vampire with the uncanny ability to control the dead, Kersey is a force to be reckoned with. But Mydian is not dissuaded. From the ashes of death, he sends Dyne back to the world of the living - to Mystyria to hunt her down. In the shackles of a human body, she will struggle against all odds - mortal inadequacies, rivalry, jealousy and deceit. Their quests will run parallel across the realms in pursuit, in fear, and in quiet deception while the gods watch on. Unknowing to both, their actions will change the face of Mystyria and ignite a brewing conflict. An angry god started the first war, an angry god started the second, the rage of a woman will start the third....

From War of the Vampire:

War is ravaging Mystyria. As his unholy capital of Bloodgate is torn apart by traitors and feuding gods, Mydian must abandon his Underworld and reclaim it. Hidden within a mortal body, he seeks out his enemies' spies while preparing for a monstrous army of undead bound for his city. With the aid of a fellow god, he devises a plan to conceal the sun - to create a safe haven for his ravenous vampires. Only one person stands in his way.... Far to the north, Dyne struggles to flee from Mydian and his servants. Now a traitor and facing the same persecution as Kersey, she's been forced to stay hidden in hopes of avoiding a torturous afterlife. With the keys to his domain in her possession, she grows empowered to stand against him. But Mydian is not the only one who chases her. Another soul, an innocent face from the past has returned to punish her for bad things long forgotten. All souls will unite to bring an end to the third and most deadly conflict in Mystyrian history. In Dyne's final adventure across the realms, will she find the peace and comfort she's sought for over 300 years? From vampire, to victim, to legend...the War of the Vampire will decide....

What listeners say about The Vampire Covenant