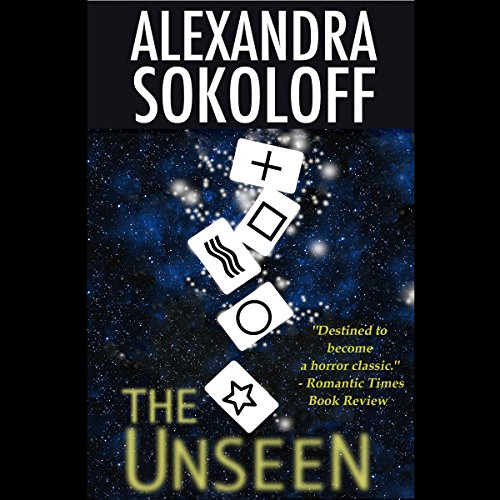 By: Alexandra Sokoloff
Narrated by: Talmadge Ragan
Try for £0.00

After experiencing a precognitive dream that shatters her engagement and changes her life forever, young California psychology professor Laurel MacDonald decides to get a fresh start by taking a job at Duke University in North Carolina. She soon becomes obsessed with the long-buried files from the world-famous Rhine parapsychology experiments, which attempted to prove if ESP really exists.

As she teams up with another charismatic professor, they uncover disturbing reports, including a mysterious case of a house supposedly haunted by a poltergeist, investigated by another research team in 1965. The two professors and two exceptionally gifted Duke students move into the grand, abandoned mansion to replicate the investigation, unaware that the entire original team ended up insane...or dead.

What listeners say about The Unseen

Awful. Waste of my time.

I can't believe this is the same author of the moon series, which is fantastic! This book is so incredibly boring but I kept listening to give it a chance. What a waste. The narrator sounded like she had a mouthful of cotton and her voice grated on my nerves like nails on a chalkboard. Do not waste your time with this one.

it fizzled out at the end

The narrator seems to have a speech impediment. She also frequently pauses in the wrong places.

The book drags on a bit but it may have been my annoyance with the narrator.

This book is great, easily one of my favorites from one of my favorite authors. However, the audio book narration nearly ruined it for me. The narrator sounds robotic and pronounces every syllable of every word separately. It sounds awful. I won't waste my money on anything read by this narrator again.

Alexandra Sokoloff is capable of much better

Her Huntress/FBI Thrillers series is superb. Unseen is a parapsychology thriller that simply fails to deliver. It is a waste of time.

I really enjoyed this book on all levels evidenced by the fact that this is the second time. I don't usually wite reviews but wanted to go on the record for this one especially if you like stories about the paranormal.

I liked the Narrator

The narrator does enunciate her words, and that is not a bad thing. It is a style that matches the uptight main character. I liked it and the story.