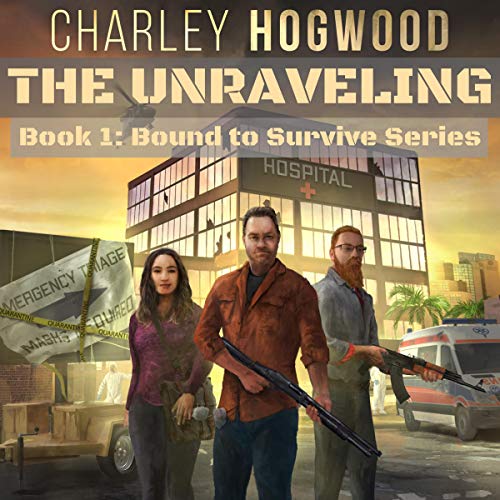 By: Charley Hogwood
Narrated by: Andrew B. Wehrlen
Try for £0.00

"On day 16, the symptoms either begin to subside, or the patient suffers a massive seizure and expires." (CDC Outbreak Update)

When Cal Bohannon went to work on Friday morning, he felt the world was teetering on a knife’s edge, but what he didn’t expect was a microscopic enemy rapidly spreading south of the border.

New to preparing for disasters, Cal’s family, along with a small band of friends, will have their survival plans tested as the fragile threads of society quickly unravel around them.

Can the fledgling group come together in time as the authorities scramble to gain control over the sudden contagion and hysteria?

What if the virus isn’t their biggest problem, but just the beginning of something much worse?

What listeners say about The Unraveling

The Shadow 'flu virus came into the United States via South America: a virulent form, one of two at the time, and fatal. The Unraveling, traces the early disruption caused as people fell prey to the illness and the focusing of a group of people in Florida determined to make a stand to survive the failing society.
This is very much a prepper book, with careful explanations and advise given either character to character or direct to the reader and it conveys a real sense of reality: there's excitement and action but it feels slow moving, deliberate, as if it really is happening. Starting in Venezuela, the story itself moves north into the United States. Characters come and go again until the central group members of family and friends are introduced, then action mostly revolves around them. As the pages turn, they begin to become convincing personalities with whom the reader can engage. This is very much assisted by narrator Andrew B.Wehrlen, whose fast paced, relaxed performance perfectly matches the text and gives individual voice to each of the protagonists.

The Unravelling, is packed: information as well as story and character development. It has more the feel of a report than a fictional thriller, which makes it all the more terrifying: bad things are happening around people the reader has grown to know. My thanks to the rights holder o, who, at my request, freely gifted me with a complimentary copy, via Audiobook Boom. Everything is in place: let the full story unfold. I, for one, look forward to the rest of the sefies. If you enjoy a good pandemic apocalypse this is the book for you.

The typical apocolipse book that seems to be everywhere, starts before the event people become preppers or have some sort of forethought about what's going on but not taking it seriously. Boring one dimensional characters who do basically nothing

Finally a post apoc prepper book that has the characters ease into that lifestyle! A realistic storyline and character development. Heading over to look for the next book!

I Survived This Audiobook

This book was a chore to finish. I just wanted it to end after a few hours in. The writing reads like a survival guide, the situation wasn't realistic, the characters weren't memorable and the writing was stoic and bland. Nothing about the story was interesting aside from the flu strand that was making people drop dead. I noticed that this is Charley's first work of fiction and it shows. His writing doesn't have any character and rings like a love song to a prepper and no one else. There was definitely some good tips on how to survive something like this in the book, but other than that, the book was pretty much a boring slog through a FEMA seminar thinly veiled as a book.

The narrator did a decent enough job at getting through the material and differentiating between different characters, but that wasn't enough to save the awful writing and dialogue between the characters. I wouldn't read or listen to book 2 of this series even if it was given to me for free, like this one.

Maybe I should start prepping

This book makes me think about being a prepper. I like that it starts at the beginning of the outbreak showing how quickly everything falls apart. The scenes showing how quickly the hospital is overrun with patients is the most interesting. Makes you wonder how many medical and emergency personnel would finally abandoned their jobs to be with family. The narrator did a great job. He added a lot to the story. I’ll be adding the next book to my wish list.

I was given this free audiobook at my request and have voluntarily left this review.

The story started out slowly. It seemed more of a prepper’s primer than a chronicle of the apocalypse. We were educated with food, supplies, and terms relative to surviving a disaster. There was also background and introduction to characters which of course is helpful. A virus similar to the flu spread into the United States from Mexico becoming a deadly pandemic. Our family of focus is in central Florida. We follow the Bohannan’s; Cal, Charlotte, and Amber along with several friends as they bond together to form a self-supporting community. The virus takes its toll. As the country loses workers it sets off a devastating domino effect on the nation. City services, utilities, transportation, and food shelves all become scarce. Survivors wonder how long this situation will last. Maybe it’s time for the Bohannan Clan to move on; to look for more secluded and safer surroundings? Unashamed hook to the next volume. I was given this free review copy audiobook at my request and have voluntarily left this review.

Great start to a new series. .

The Unraveling book 1.. Great start to a new series .
Back to the basics of the apocalypse. The Unraveling of society and civilized behavior.
A story that relays how quickly it can go south.
Andrew. B Wehrein narrates in his unique upbeat style, brings light to the darker scenes.
I think this is a must read book for anyone who likes post apoc.
I received a free copy of this audio book at my own request and voluntarily leave this honest review.

Enjoyed the book. I believe the author was very timely or prescient in some of the events that take place in the story line. I enjoyed the narrator so much that I have started another series he narrated called Roark.
His cadence is good and voice inflection isn’t a burden for the story line. He doesn’t out read the story he just takes the take.

The suspense is gonna kill me!

Great book! Can't believe I have to wait for the sequel! Cruel and unusual punishment! Great characters, great narration. Cant ask for anything better! You will enjoy this book!

The narrator was good enough, but the story was so lacking in so many ways. The regular everyday folks being suddenly able to kill looters and not even blink an eye is so ridiculous. A college girl loosing her boyfriend to gangsters, being kidnapped, and not even having a reaction made me roll my eyes. So much of the story was just ludicrous. Why did NONE of the main characters get the virus? Not one of them - even the ones who were coughed on or exposed closely when giving medical attention to the sick? Everyone got the virus except them? It was just all so silly. I like stories that have scenarios that seem more realistic.

The story took forever to really get started too. It was more of a preppier manual than a story for much of the book. BORING.

I really wanted to listen to this book, but the narrator is terrible. Please listen to the sample prior to purchasing. That’s about all I can say.