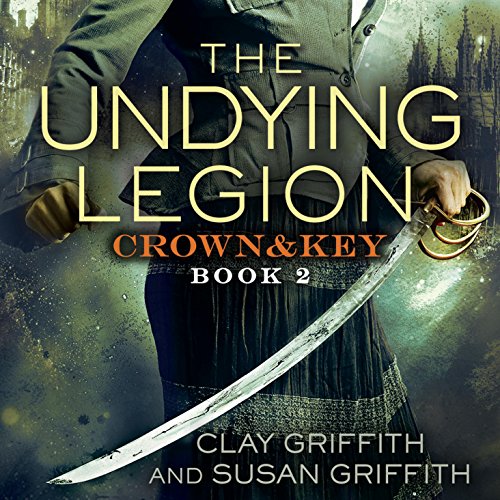 With a flood of dark magic about to engulf Victorian London, can a handful of heroes vanquish a legion of the undead?

When monster-hunter Malcolm MacFarlane comes across the gruesome aftermath of a ritual murder in a London church, he enlists the help of magician-scribe Simon Archer and alchemist extraordinaire Kate Anstruther. Studying the macabre scene, they struggle to understand obscure clues in the ancient Egyptian hieroglyphics carved into the victim's heart - as well as bizarre mystical allusions to the romantic poetry of William Blake. One thing is clear: Some very potent black magic is at work.

But this human sacrifice is only the first in a series of ritualized slayings. Desperate to save lives while there is still time, Simon, Kate, and Malcolm - along with gadget geek Penny Carter and Charlotte, an adolescent werewolf - track down a necromancer who is reanimating the deceased. As the team battles an unrelenting army of undead, a powerful Egyptian mummy, and monstrous serpentine demons, the necromancer proves an elusive quarry. And when the true purpose of the ritual is revealed, the gifted allies must confront a destructive force that is positively apocalyptic.

What listeners say about The Undying Legion: Crown & Key

Book two was very exciting..I didn't think it would be as good as the first one but I was wrong ..into the final book of this trilogy to see how the plots transpire

I loved this book! Clay Griffith and Susan Griffith have woven adventure, excitement with a touch of romance to create a can't-put-down story. Nicholas Guy Smith has done a superb job of bringing all the characters to life and making you feel like you are right there and part of the group. I highly recommend this book!

Once again, Nicholas Guy Smith knocked it out of the park with his amazing narration. Why hasn't anyone made this series into a movie??

Simon and the gang are back! And I love it. Paranormal creatures, magic, steampunk, and a Victorian romance. Friends, enemies, and families tires are so intertwine you don't know where one ends and the next begins. One thing is sure Simon no longer has the time to be a play boy, Malcolm has to deal with him werewolf bigotry and the Anstruther sisters have a come to Jesus moment.

The legacy of Pendragon is still rocking the world and the gang has to stanch the bleed. Yet there is so much richness in magic other than it being black and white. What the gang finds is intent defines what the magic really is.

I am a die-heart King Arthur fan, so I enjoy the Pendragon material. Pendragon and Merlin have so much mystery between them. The Pendragon in this series is a little of the Merlin magic and the nobleness of Authur. Like the knights of the round table, the Pendragon accolades are driven mad vying for the affections of the great man. Simon and Kate must clear the mystery and recreate the society.

Fantastic characters, very atmospheric, engaging. Loved this. Let's make it a series of ten instead of a trilogy.

agreat end to the series

If you could sum up The Undying Legion: Crown & Key in three words, what would they be?

What was one of the most memorable moments of The Undying Legion: Crown & Key?

what a stupid question, there are no 'moments' this is a rollicking story that is not a series of moments

What aspect of Nicholas Guy Smith’s performance would you have changed?

a great listen, and as the end of the series so far?