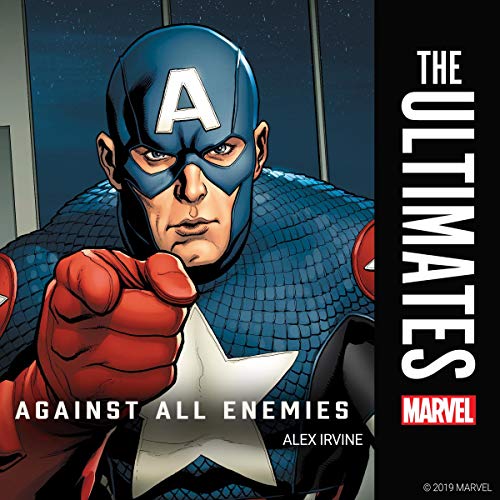 The Ultimates: Against All Enemies

By: Alex Irvine,Marvel
Narrated by: Richard Rohan,full cast
Try for £0.00

The alien shapeshifters called the Chitauri were defeated by the Ultimates in a decisive battle, but suspicious activity leads the Ultimates to believe that not all of the aliens were destroyed in that cataclysmic attack. Stark Industries has developed means of quickly and easily detecting Chitauri DNA, but the federal government refuses to adopt the technology, claiming that if the tech is widely available, the Chitauri will find a way to fool it.

Frustrated by the government’s seeming unwillingness to protect its own people, Captain America takes matters into his own hands, leaking the technology so that it can be manufactured and distributed throughout the country. His radical actions sow discord among the Ultimates and, within the highest levels of government, raise a troubling question: Could disunity and chaos be playing right into the Chitauri's hands?

Meanwhile, Hank Pym, who desperately wants back on the Ultimates team, has been feverishly experimenting with his ants in the hopes of finding his own alternate method of detecting the Chitauri. When he appears to be successful, it could spell doom for the alien menace - but only if the Ultimates can finally set aside their differences long enough to recognize their true enemy.

What listeners say about The Ultimates: Against All Enemies

Another great instalment in The Ultimates universe

Definitely worth a listen.
Nice to see the marvel characters spun in a slightly different universe where their flaws and beliefs are pushed a little and the universe is slightly more grounded.
Always great to hear the full cast performances on these.

As a long time lover of books and borderline obsessive comic fan I was always looking for prose novel editions of my favorite comic story arcs as well as original stories published in prose. It was this path that lead to my discovery of audiobooks and then, the end of the rainbow, top of the mountain, pot of comic book gold that is GraphicAudio! My first outing was with “Batman: No Man’s Land™️”. The voice acting is superb, music score SFX makes it so immersive you can lose yourself for hours and hours. In addition that all that; Richard Rohan is the only narrator I ever want to listen to again! He is simply unparalleled, his smooth yet stern tone, his phrasing and articulation. He fits this genre beautifully. Take from a fan boy like myself; if you’re a comic book fan, do yourself a big favor and start listening to GraphicAudio!