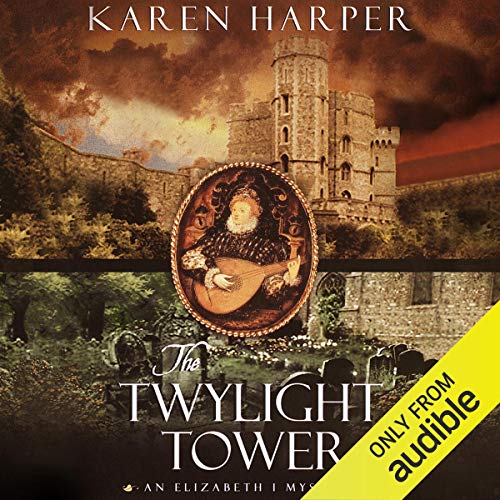 By: Karen Harper
Narrated by: Katherine Kellgren
Try for £0.00

It is May 1560. As sinister storm clouds gather overhead, 26-year-old Queen Elizabeth dispatches William Cecil, her most trusted adviser, to Scotland for crucial negotiations. Handsome, ambitious Lord Robert Dudley is at her side. But their leisurely midsummer idyll is cut short when the courts master lutenist plunges to his death from a parapet beneath the queen's window. The loyal retainers of Elizabeth's privy council do not accept the official verdict of accidental death. Their fears are borne out when another tragedy rocks the realm, and points the way to a conspiracy to bring down Elizabeth and seize the throne. As ill winds of treachery swirl around the court, and suspicion falls on those within Elizabeth's intimate circle, a vengeful enemy slips from the shadows...a traitorous usurper who would be sovereign.

With The Twylight Tower, Karen Harper brings a legendary era to life, drawing us into an intoxicating world of majesty and mayhem, political intrigue and adventure...where danger is everywhere...and where a young queen journeys to greatness in the long shadow of her bloodstained past.

What listeners say about The Twylight Tower

The wrong narrator ruined the story for me

I have a long standing mental image of Elizabeth I that the narrator, Katherine Kellgren, tore to shreds. Those of you who have listened to the Her Royal Spyness series will be familiar with Ms. Kellgren. She is great for that series (though wearing after a couple of volumes) which is campy and light. Unfortunately, her reading style doesn't translate well to Tudor England. Her overwrought narration often overwhelms the story. When a Elizabeth shouts, she shouts so loudly I jumped. I have trouble keeping the volume at a consistent level.

I selected the book because it takes place at almost the same time and involves many of the same characters as a book I had just finished (To Shield the Queen by Fiona Buckley) and I was interested in comparing the stories. To Shield a Queen is a lighter story but a much better listening experience.

This book deserves no stars at all!

Awful. The narration is muddy. The story and characters are absurd. Elizabeth I must be whirling in her grave at the way she is portrayed. Sometimes it is a matter of taste. I've bought a couple of historical mysteries from Audible and had to force myself to listen to the whole thing. Maybe I didn't like the narrator or the story had a few holes (like Swiss cheese!) but I did get to the end. I could only make it through the first hour and a half of this book. That should be long enough to flesh out at least a little of the story but not this time.