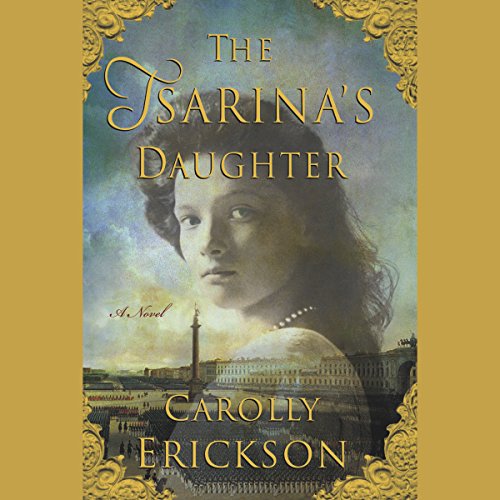 By: Carolly Erickson
Narrated by: Susan Jameson
Try for £0.00

Daria Gradov is an elderly grandmother living in rural western America in the 1980s. What neighbors and even her children don't know is that she began her life as the Grand Duchess Tatiana, daughter of Tsar Nicholas II and Tsarina Alexandra. The Tsarina's Daughter centers around young Tania, who lives a life of incomparable luxury in pre-Revolutionary Russia, from the magnificence of the Winter Palace in St. Petersburg to the family's private enclave outside the capital. When her younger brother is diagnosed with hemophilia, the key to his survival lies in the mysterious powers of an illiterate monk, Rasputin. Soon his hold over her parents threatens to destroy them all. But war breaks out and revolution sweeps her family from power and into claustrophobic imprisonment. Then into Tania's life comes a young soldier whose life she helps to save and who becomes her partner in daring plans to rescue the imperial family from the executioners' bullets.
©2008 Carolly Ericksen (P)2008 BBC Audiobooks America
Historical Fiction
Show More Show Less

"Suspenseful and detailed, the novel captures a dramatic moment in history and will sear you with sorrow for this doomed daughter of the last tsar." (People)
"Erickson...never lets harsh fact impede a good story....Although the particulars of the Romanovs' fall are familiar from other treatments, including Erickson's biography of Alexandra, the suspense never flags....More entertainment than history, but all the better for it." (Kirkus Reviews)

What listeners say about The Tsarina's Daughter

A touch too childish for the adult reader. Slow.

A slow start. A dragging tale. Alot of fantasy. Really? Frued and a Russian Grand Duchess who goes and comes as she pleases. Not Erickson's best work.

I thought this was a very good book. I have listened to/read and liked other books by the author. Since most of the books about the Romanov daughters seem to be about Anastasia, this has a different viewpoint. Although this is fiction, her descriptions of the era and family ring true. The reader was new to me, but did an excellent job.

The writing was excellent. It truly brought the world of Czarist Russia to life. The only issue I had with it was that, despite the fact that I knew it was a novel, I couldn't keep the actual fate of the family, including Tatiana, out of my mind. It somehow took the edge off my enjoyment.