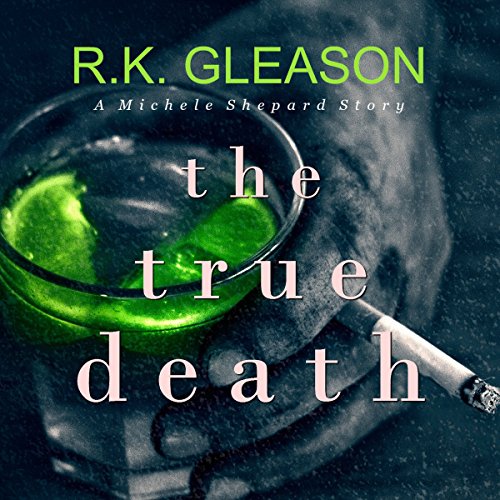 Headed for some well-deserved shore leave, Shepard is gunned down in the streets of Seattle, a victim of "a mugging gone stupid." He awakens, not in a hospital bed, but in the surreal world of Purgatory. Within seconds of his arrival, he is saved from a gruesome and painful end by his new best friend, Horace. That's Quintus Horatius Flaccus the philosopher, to you Roman history buffs. Horace explains to Shepard the cold, hard rules for surviving in Purgatory. More than just the walls have ears, and he's not sure how long Shepard will last.

What listeners say about The True Death

If you can describe a book as quirky, this is certainly it! It goes from laugh out loud humour to suspense, action, drama and what I can only describe as a gory, horrific, slime filled true death. Intrigued? I was all the way through!

I really enjoyed this audio book, the narrator was excellent, he was so expressive and he did the dry, drole humour very well.

Do you think you could survive purgatory where there are only two rules that must be followed? Mwahaha unless I was lucky enough to meet a Horace in my first few minutes like Shepard did, I don't think I'd have lasted long at all!! Want to know the rules? Read it to find out, it will make you laugh, cry and cringe all at the same time lol. I'm looking forward to what happens next.

I had a hard time with this book, and I couldn't tell if it was the performer, the material, or both. After a few hours of listening, I realized it was a combination of the two.

I'll start with Ian Pugh's performance: I had a hard time adjusting to his tone at the onset. It made me realize that most of the audiobooks I listen to are narrated by deep voices (R.C. Bray, Dennis E. Taylor, John Lee, Michael Kramer), and so I did my best to shed my own prejudices and enjoy Pugh's performance on its own merits. It made me realize what a challenge it must be to narrate an audiobook: do you read each chapter silently right before you perform it? How do you know what emotions to imbue on certain sentences?

Pugh also starts most of his action sequences in a higher tonal range, which doesn't leave him much room to ratchet it up when things get exciting. A personal pet peeve. Finally, a lot of the voices just didn't work for me. The difference between The Bad Guy and the Other Things is negligible - they sounded very similar. And there wasn't a whole lot of differentiation between other character voices as well. I understand that Pugh is just breaking into this business, and hope he'll take the feedback as constructive and not nitpicking. But a good portion of the time his tone felt like he was trying too hard - speaking up in a way that made it feel forced, instead of either a relaxed reading or a hair-raising performance.

Next up, the content: Gleason's world raises more questions than he answers, and not in a good way. How did Purgatory develop technology? What is the history of their industrial revolution? It takes Gleason far too long to get to mentioning any sort of government, and not once is there mention of any sort of law enforcement - or lack thereof. Shepherd doesn't ask any of the questions I would presume someone would ask if they were dumped in such a world. How did they develop currency? What do most people do with their immortal lives? Why don't they have media, TV, newspapers, etc?

I never got a sense for the people who live in Purgatory, outside of the immediate circle of characters: Shepherd, Horace, Matthew, etc. The bad guys are one-dimensional, the plot twists were predictable, and I had a hard time caring.

Which is disappointing, because the world he's created is fascinating. And horrifying. I found myself hesitant to say the F word the entire time I was listening to this book, for fear of being taken. And the societal question of &amp;quot;what will people do if they never have to worry about dying?&amp;quot; was never really raised or dealt with - and it seemed like the proverbial 800 pound elephant in the story.

Horace hints at some of the chaos that ensued after The Rules went into effect, but it is cursory - like Gleason realized he needed to address it and glossed over it quickly. When that back story is really what could have made the rest of the story matter.

How do people maintain their humanity when the only option left to them looks like Hell? That is the question I wanted answered in Gleason's Purgatory, and I don't have the patience to read subsequent books to find out if he ever answers it.

1st let me start of by saying, this is the first time I listened/read this genre. I am more of a romance reader. but I received this copy for free, and I have to say, I absolutely loved this book, Shepard and Horace are great.
The narration was perfect. the humor was great throughout the whole book. if you enjoy RK Gleason I definitely think you should give this Audible a try

it grows on you

My first book from Mr. Gleason. I went it not knowing what to expect. It is good but needed time to let the story grow on me. The writing is excellent, love the author's style but it is the type of story I usually avoid, my imagination is too vivid. If you can get past the gory parts described in detail, the story is pretty good and the more I listened, the more it grew on me.
Sheppard's intro to Purgatory and subsequent interactions with the inhabitants are at times violent and gory but eased by hilarious parts, a rollercoaster ride for sure. Quite a revelation at the end about Matthew. I am invested in this series now, I want to know more.
My first audio from Mr. Pugh and I think his voice was part of why I stuck with the story, I am glad I did in the end. Love his animated voice, the tones and the emotions I hear listening to him telling the story. I really hope he is working on the rest of the series.

Over all, a good performance by a new voice

What made the experience of listening to The True Death the most enjoyable?

I agree with a lot of what the previous reviewer had to say, however, I still liked this book a lot more than they did. Certainly this isn’t Shakespeare, but it’s a fun, pulpy horror story told with good energy. Gleason’s writing is really fun, he is witty and dark, and his characters are intriguing and have depth.

I think the world that Gleason creates is supposed to leave a lot of questions unanswered. Because the book is mostly first person, we only get to see this horrific world of Purgatory through the eyes of a person who has just arrived. Shepard asks a lot of questions that help get us started, and it is clear from the world building and the way that Gleason unfolds the story that this is a rich and well thought out world. Did I want to know more? Yes! But if the whole book spent time just giving us answers to all our questions it would have been a snoozer. Instead it was packed with lots of action and intrigue and really good stomach turning gruesomeness that helped answer some of those questions without getting us bogged down in too much exposition.

Have you listened to any of Ian Pugh’s other performances before? How does this one compare?

First time I've heard Pugh read. I think he is new to the scene.

I think the interplay between Shepard and Horace was really great and this was probably where I liked Pugh’s performance the best. I didn’t feel like the other voices were too similar, but I do agree that Pugh’s voice was a bit high strung at times, but it didn’t bother me - I wrote this off to the first person narration and Shepard being thrust into non-stop peril. That the whole book is told in first person by Shepard must make the narrator’s job so much harder, and Shepard is a really funny character on top of that, and I felt Pugh really nailed his personality, and kept up that energy consistently through the whole book.

I'm looking forward to more from Pugh. He is going to mature into a great reader.

I do think the pacing on some of the development was uneven. And the conclusion feels a bit rushed, especially the relationship between Horace and Mathew. A lot of big stuff goes down at the end with them, and I would have liked more time to live in that betrayal and the forgiveness. One of Gleason’s strengths is his ability to write snappy, sarcastic dialogue. This is, however, also a point of criticism, he relies perhaps too much on dialogue in his writing to reveal character. I found myself at times wanting a bit more prose to flesh out the characters and the world.

Still, for the first book in a pulpy, paranormal, horror story, (genres I read a lot of) I enjoyed myself enough to continue on with the series.

Disclaimer – I got this audiobook as a free promotion. Generally I don’t listen to audiobooks, preferring to read for myself.

I love these characters and I was sucked into Purgatory from the very first page.