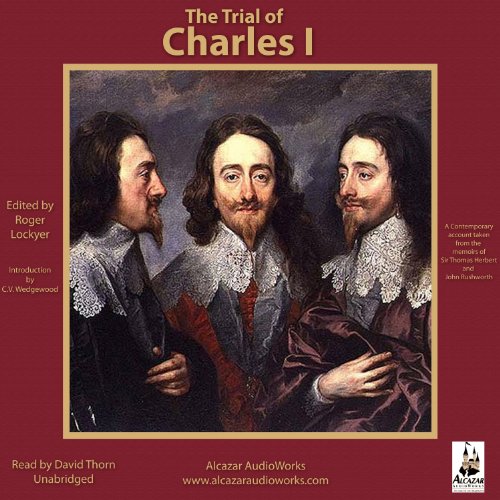 The Trial of Charles I

By: Roger Lockyer
Narrated by: David Thorn
Try for £0.00

A contemporary account taken from the memoirs of Sir Thomas Herbers and Hohn Rushworth.

Taken from two main sources, John Rushworth's Historical Collection (circa 1659) and Sir Thomas Herbert's memoirs (circa 1678), this book will primarily be of interest to those who have a deep curiosity about this historic event, unprecedented in the history of European nations at that time. It chronicles - sometimes dramatically, sometimes poignantly - the king's imprisonment after his defeat in the civil war, the events and paliamentary debates leading up to the charges of high treason being brought against the king, and a virtual transcript of the trial itself - bringing into our living-rooms the spirited arguments between Charles and the president of the court, Lord Bradshaw.

We are witness to the king's last hours, his execution in Whitehall - preceeded by his short speech to those around the black-draped scaffold - and so to the poignant scene of his funeral at Windsor Castle. Rushworth was a lawyer/historian and one time clerk-assistant to the House of Commons, later secretary to General Lord Fairfax, and for a short time, to Oliver Cromwell. Herbert was appointed by Parliament to attend the king as Groom of the Bedchamber during the king's captivity and served him faithfully to the end.

What listeners say about The Trial of Charles I

Off with his head!

Would you listen to The Trial of Charles I again? Why?

Yes I would-in an age of text, internet and all sorts of deformed communication it is exhilarating to listen to English the way it was spoken and read in the 1600's. Once your ears become accustomed to the language it's a revelation.

I particularly liked the commitment to primary sources-these people were there! With minor emphasis on the battles and Oliver Cromwell and no hindsight, the important characters in the narrative come alive.

What does David Thorn bring to the story that you wouldn’t experience if you had only read the book?

I really enjoyed his portrayal of Charles Stuart-the stutter and the accent; I enjoyed the tone David Thorn used in emphasising the frustration of the Commons court.

I knew the ending so I was not bothered.

The richness of the English language should not be lost in a 140 characters and I would encourage everyone to explore our incredible heritage.