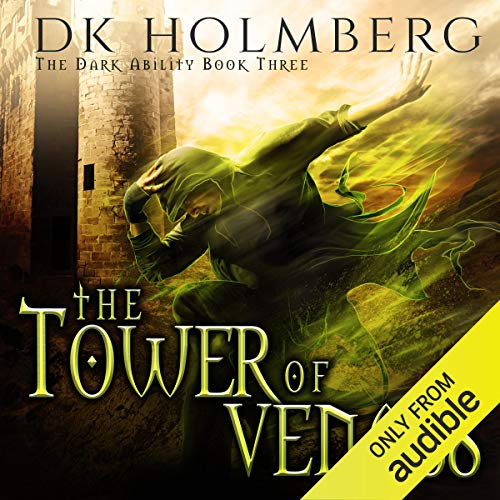 Master of lorcith. Gifted with Sliding. Pawn of the Forgotten.

Rsiran now understands that he can use not only the arcane power of lorcith, but also that of heartstone. This ability makes him powerful, perhaps too powerful for some. Others know of his ability and seek to use him.

After Brusus is attacked, Rsiran makes a decision that requires an unlikely ally, and brings him to dangerous Thyr, where the Scholars of Venass offer their aid, but for a price.

But the scholars want Rsiran for the same reason as the Forgotten. While he strives to discover why, what he finds changes everything that he has come to believe, as he learns that the struggle he's seen is only the beginning to a greater battle. And somehow he's the key to ending it.

What listeners say about The Tower of Venass

I don't have the energy to elaborate more, but the narrative was very annoying and always revolved around the same thing.

The only reason I listened to this is because the main story is intriguing and I have the weakness of always finishing all storylines I start.

I tried to keep going because the story was promising and interesting. The magic system with the different abilitys was intriguing as well. But the way the main char keeps whining and moping about everything thing in his life constantly through out the last three books over and over again, well its really depressing and annoying. The main character is also extremely stupid always putting himself in to situations where he is captured never willing to kill or hurt anyone . If you have read the first two books then you understand what im taking about, well it doesnt change in the third book. if this was the real world he would probably have committed suicide a long time ago. I dont know why the reviews on this book are so high when the main character spends about 20% of each book complaining about the same things. The author should read some books by Brandon sanderson to see some true character development and world building that they are severely lacking in. probly will not read or listen to any books by this author again if they are similar to this last series.

Too much internal dialog

I enjoyed the first book, book 2 was a bit repetitive, book 3 I want my money back. Jessa has become so weak and whiney that her character is ruined. It’s a shame she got captured, but seriously get mad, get even something besides hang on Rsiran and be constantly afraid. Rsiran has constant repetitive dialog in his head. You barely get past the previous blah blah blah, my dad was mean to me, my ability is dark, I must protect Jessa blah blah blah and get back to the story only to have him take off again. If only he could have a NEW worry to tell about it might not be so boring and irritating. I find myself clicking the fast forward 30 seconds button often. If I manage to finish this one it’s going to be on 2x speed.

Like many new authors of today, this author must have a list of historical events, doubts, insecurities, and past failures that must be repeated every 15 pages in different grammatical forms for reasons known only to God Himself. I concluded that these are written for those who suffer from Alzheimer's disease and need to be reminded of basic information on each character. Other than that, it's one Great series. You only need to skip 3 pages every 15 pages to get on with the rest of the story. I recommend this series to everyone.

This series has potential. Each book makes The story line better and richer. The repetitive internal dialog gets old. Publishers fault nodoubt. I'm sure they asked for more words, and that was the only place to put them. Let the writers write man. Not every book has to be long to be good. hopefully book 4 is better