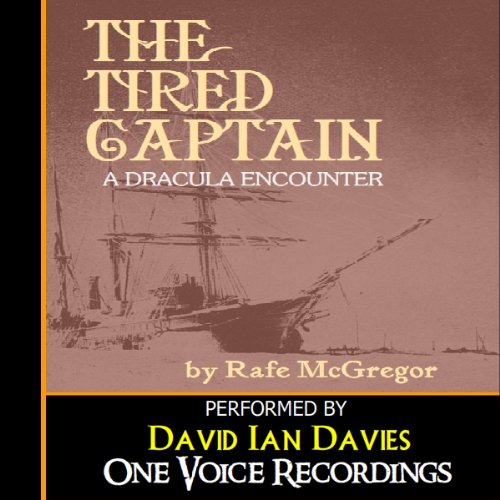 England, 1893. Chief Inspector Roderick Langham of Scotland Yard is asked to investigate the discovery of a Russian cargo schooner whose crew has vanished except for its captain, who is found dead, tied to the ship's wheel. The captain's log speaks of strange cargo aboard and the crew members disappearing one after another.
©2009 Rafe McGregor (P)2009 One Voice Recordings

What listeners say about The Tired Captain

The Count Meets his Match

This is the second pairing of Mr's McGregor and Davies - the first being sly murder-mystery The Long Man - with the former on writing duties, the latter narrating, and both performing sterling work. Rafe McGregor delivers another clever and audacious armchair mystery, while David Ian Davies seems to have worked his way fully into the character of the disgraced, inspired, half-mad Inspector Langham, inbuing him with a weariness and self-doubt that will seem entirely fitting to anyone who's enjoyed his first outing.

Poor Langham seems cursed to stray under the tracks of great literary creations; in The Long Man he ran afoul of Holmes and Watson, and here he finds himself investigating the wreck of The Demeter on the cliffs at Whitby - a subject that will be more than a little familiar to anyone who's read Bram Stoker's Dracula. McGregor's tale twists neatly through the novel's background, and treats Stoker both respectfully and playfully, just as he did Conan-Doyle.

This is a remarkable merging of literary homage and faux history, striking exactly the notes you'd hope for in such a tale. Well worth a purchase for fans of anyone involved, or anyone with an affection for good, old-school crime writing.

The Mystery of the 'Demeter'!

Another fine offering from the McGregor-Davies pair. The only author I've read so far that's spotted a fairly obvious mistake in 'Dracula'...and turned it into a short story. Fans of the count and Holmes will love this one. It's also a sequel to 'The Long Man', although it can be enjoyed on it's own. Great Stuff!

A Good Story At A Good Value

I enjoyed "The Tired Captain," and felt I got a good value for my money.
The story is well-written, but will probably be more enjoyable for readers familiar with the novel "Dracula," but mystery fans should like it too.

My main complaint with the story itself is that it seems a bit short. I wanted to see a little more detective work and false turns.