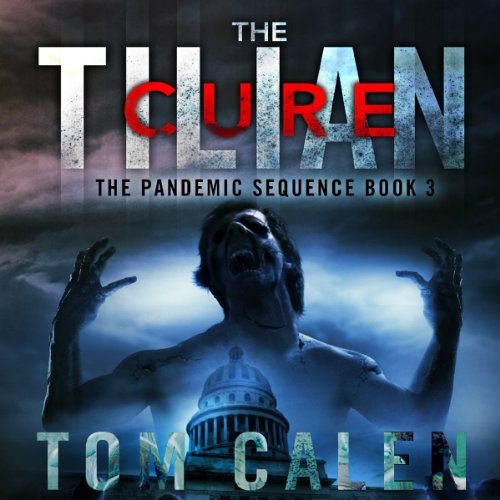 Narrator Scott Aiello's riveting performance will provide listeners a strong sense of satisfaction as he wraps up the final book in the Pandemic Sequence trilogy. Aiello also narrated the previous two installments, and his familiarity with the characters allows listeners to easily identify with them. Now that the victims of the plague, known as "Tils", are going through a disturbing evolution, the survivors of the plague must find a means to put an end to the threat engulfing the world. Aiello gives characters complex layers of emotions and thoughts, and he imbues the story's surprising ending with finality and gravitas.

The virus spread quicker than anyone could have imagined. Within days, over half the world's population became infected. Now a small band of survivors, led by high school teacher Mike Allard, must learn to live in a world ravaged by the deadly victims of the Tilian Virus. Weaving together two separate time frames, The Tilian Cure is a tale of humankind's most dire hour. Faced with imminent elimination, humanity's last glimmers struggle to break through the darkness of a pandemic the world has never before experienced.

What listeners say about The Tilian Cure

good end to the series

Would you try another book from Tom Calen and/or Scott Aiello?

yes, the author's storytelling is pretty good but rushed at times. i really enjoyed scott aiello's narration. he has a familiar, warm voice that lulls you easily into the story.


three weeks have passed since the end of book 2. in texas, paul, hicks, and dereck are trying to figure out what to do about the hoard- the 200+ survivors they now find themselves in charge of after overthrowing the previous leadership. paul wants to lead them to one of the designated rendezvous points so that people can decide whether they want to go to new cuba or stay on the u.s. mainland and continue to look for survivors. as they debate the future of the hoard, a series of high-pitched screams rattles the camp. paul, hicks, and dereck rush through the camp to find the source of the screams. when they arrive at the right tent, they learn that a till has managed to sneak into the camp and into the girl's tent. however instead of attacking the little girl, the till mysteriously flees. un-nerved by the till's actions, paul reluctantly allows hicks and dereck to track the till in order to find out if there are more tills around and why the tills' behavior seems to be changing. what they discover will have serious repercussions for the entire hoard.

elsewhere at fort polk in louisiana, mike, michele, lisa, eric, and matt have disposed of the tills that attacked the base. mike, eric, and lisa are determined to find paul and tell him the truth about the conspiracy. against mike's wishes, michele and matt head back to new cuba in an attempt to retrieve more arc (acoustic restraint and coercion) devices in order to be able to fight the tills. michele also wants to confront duncan, the leader of the gov't council in new cuba, about his role in creating the tillian virus and causing the current apocylapse.

the final book in this series nicely brings together and wraps up all the different storylines. if you've listened to the first 2 books, then i think you'll like how the stories converge and finally end. imho, it was a satisfying ending to a pretty good series.

If you could sum up The Tilian Cure in three words, what would they be?

Which character – as performed by Scott Aiello – was your favorite?

After a rough start, in listening, to book 1 this final book closes the story out really well. I would definitely recommend listening to the first 2 books before starting this one.