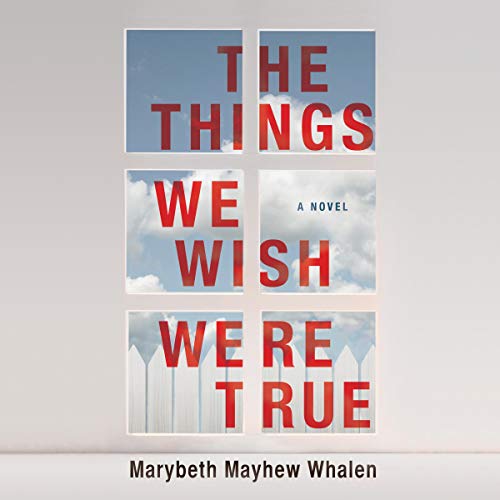 The Things We Wish Were True

In an idyllic small-town neighborhood, a near tragedy triggers a series of dark revelations.

From the outside, Sycamore Glen, North Carolina, might look like the perfect all-American neighborhood. But behind the white picket fences lies a web of secrets that reach from house to house.

Up and down the streets, neighbors quietly bear the weight of their own pasts - until an accident at the community pool upsets the delicate equilibrium. And when tragic circumstances compel a woman to return to Sycamore Glen after years of self-imposed banishment, the tangle of the neighbors' intertwined lives begins to unravel.

During the course of a sweltering summer, long-buried secrets are revealed, and the neighbors learn that it's impossible to really know those closest to us. But is it impossible to love and forgive them?

What listeners say about The Things We Wish Were True

The terrible attempt by narrator to talk southern made this almost unbearable to listen to.

I'm on my 61st book of the year and this is only the 3rd I've felt compelled to stop and review. I LOVED this book!!! The story was great, the characters were so complex and relatable, the performance was spot on, the emotions were so real. Thank you to the author! Do yourself a favor and read this book!

This is just a story. The story of several people and their lives over one summer. They each tell their own story. I thought the performance was wonderful, the writing very good and character development perfect. It shows that our lives are not perfect, but they're better than we think they are more often than not.

great way to pass the time

a good read to pass the time with. not very heavy or suspenseful, but charming in its own right. like small town gossip that everyone wants to know about.

"And yet, Jencey understood, there were the things she wished were true, and there was what was actually true. She was learning that there was usually a great distance between the two."

Sycamore Glen, North Carolina is a small town and as in every small town, everyone thinks they know everyone else’s business. The book opens as the citizens of the town are lined up outside the city pool waiting for the gate to open for the first swimming day of the year. The entrance is covered by a giant spider web, which is symbolic of the web of lies that are woven throughout the community. And just as the spider web is torn apart and swept away, by the end of the summer, every character’s secrets will be destroyed and exposed.

As this book is full of secrets, I am not going to touch on the plot much, so as to avoid spoilers. This book was enjoyable, but it was nothing spectacular. My main complaint was probably the names of the characters. They were just a little too “soap opera” for me: Jencey, Bryte, Zell, Cailey, Lane, etc. The fact that nearly every single person in the book had some “boutique” name made the whole book less believable in my opinion.

The other main complaint I had involved one of the subplots, involving a creepy old man who lived in the neighborhood. In the end, his role in the book was actually a pretty major thing, but this entire subplot was not given near the attention I think it should have been.

During this opening day at the pool, an accident happens that pulls all the main characters together. This was done much like an ensemble cast movie, such as Magnolia, Love, Actually, Crash, 21 Grams, or Playing by Heart, where multiple seemingly unconncected storylines converge. This is my favorite type of movie, and although I normally love books like this, too, this one just didn’t do it for me. Maybe the author tried too hard to pull it off, and made a few too many storylines to deal with, I’m just not sure.

I would recommend this to readers of chick-lit, and to those who love multiple storylines. In a review on Goodreads, a reviewer said this book reminded her of books written by Catherine Ryan Hyde, and I agree wholeheartedly, though I tend to think Hyde’s books are a little stronger than this novel.

⚔️ KNIVES’ RATING REPORT
Plot ♥♥♥
Characters ♥♥♥
Writing ♥♥♥
Pacing ♥♥
Cover ♥♥♥
Overall ♥♥♥
As I agree this book reads like a Catherine Ryan Hyde book, here are a few of my favorites by her:

I couldn't finish this book. I wanted to like it but the narration was terrible. if there needs to be a southern accent, please use a narrator that actually has one! the narrator's fake southern accent was too distracting to the story. perhaps I'll try reading it instead.

Somewhat of an OK book. By the time you start getting into the plot, it all of a sudden is over. I would have liked more details about the interesting parts of the characters lives instead of 75% of it just building to the end. Kind of felt like a show that got cancelled mid season and the writers have to wrap everything up in one episode. I guess if you're looking for a super easy-to-follow book that doesn't require you to pay close attention, this one works.

I wasn't sure going into this book what it was gonna be like, but I was pleasantly surprised! I found my self really liking the characters and wanting to know more about each of them. They each had their own secrets they were hiding, but after an accident they all come out in one way or another. The author did a fantastic job tying all the stories together and tying up all the loose ends! The narrator did a great job with all the characters! I really enjoyed this book and I will be recommending it to my friends! It would be nice if there were more communities like this where neighbors cared about each other and helped each other!!

Would you try another book from Marybeth Mayhew Whalen and/or Taylor Ann Krahn?

Was The Things We Wish Were True worth the listening time?

Not really, the book was just okay, and not very engaging.

No, too predictable, too whiny

I would need to rewrite the book.

What about Taylor Ann Krahn’s performance did you like?

She was very good at switching voices.

Did The Things We Wish Were True inspire you to do anything?

Yes, the one thing I did like was, the way she wrote the book in characters i.e....Jenny, Lance , Brite etc.