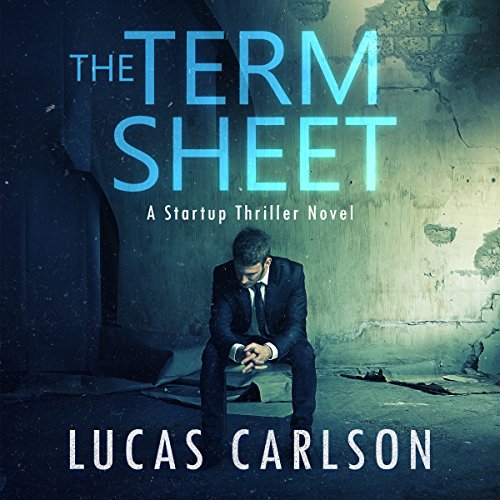 The fate of the country depends on the decisions of one ambitious entrepreneur.

David Alexander always dreamed of starting his own company. But in the exciting world of tech startups, where venture capital rules and billion-dollar businesses are the holy grail, things can and do collapse - in the blink of an eye....

David's thrown into this world, and his adventures spiral him into a dark hole of terrorist plots, government espionage, and classified information. It's not as elegant a universe as he had first thought. One wrong decision could put the country in jeopardy, collapse David's company, or even cost him his life.

The Term Sheet is a fast-paced techno-thriller about entrepreneurship, startups, encryption, and the delicate balance between national security and individual privacy. Its complex characters explore thought-provoking questions about the role of technology in an ever-changing society. Step into the high-stakes game played by today's technology innovators, who push the envelope and risk it all. Get ready. This thrilling book gives you a taste of what startups are really like.

What listeners say about The Term Sheet

Follows a young entrepreneur as he tries to make his fortune. After a few failures he hits on an encryption tool that draws attention from big firms and the secret service.

Well delivered by Jeffrey Kafer, who keeps the story moving along nicely and offers distinct differences in the main characters.

Be thrown into a world of venture capitalists, the FBI, CIA, and more. David Alexander is always looking for the next best thing when he comes up with an idea for an easy to use encrypted chat client. He doesn't really want to follow through on the idea, but his best friend convinces him to and the rest is history. Mixed into this fast-paced business/startup thriller is a terrorist plot that weaves in and out of the story.

If you don't know who Jeffrey Kafer is and you listen to audiobooks, especially fast-paced thrillers like this one... you should. Kafer is a great narrator, who helps already great books become even better. The production quality is perfect with no errors. Literally every time I finish a book narrated by Kafer I go to his books on Audible to try and figure out what I'm listening to next.

This book was great, a real page-turner. I found myself sitting and just being totally entranced by the world that Carlson created. You definitely run the gambit of feelings for David's character. There are things that he does that make you hate him, and things that make him incredibly lovable. And that's always great out of a leading character for a book.

My only complaint is jumping around in time. I don't know if in the book it explains where/when they are or if you're just supposed to piece it together. As an audiobook listener, it's hard to go from present to the past without a little warning (Chapter __ isn't always enough).

Overall, Carlson has written a really great book that weaves in terrorist plots with encryption. Takes coding and makes it fun and interesting (by always talking around it). But I can definitely tell that Carlson has had some experience either in the startup world and/or with coding and encryption. The premises here are all too real, and the story is incredibly plausible.

Also, on a super funny side-note, after I started reading this I was reading Facebook and a story in a tech magazine popped up talking about how you can now buy jellyfish and their tank online. SUPER creepy.

Carlson's writing style reminded me a lot of Joseph Finder (who's stories I absolutely love). Mixed in with someone else, but I can't put my finger on it. If you're looking for a quick read on a flight or on the train/subway -- pick this up. You won't regret it, but you will think about the texts you send to your friends.

Did you like this review? Please vote it helpful if you did. Also, check out other reviews like this at books.beergodblog DOT com

If you could sum up The Term Sheet in three words, what would they be?

I've been looking forward to reading The Term Sheet ever since I heard Lucas Carlson was working on it over a year ago. Lucas is a veteran tech entrepreneur and this novel draws on his real experiences and weaves them into a pulse-pounding page-turner.

The story follows a tech entrepreneur and a government agent as they wrestle with themselves and dark forces beyond their control while trying to build a new technology company and avert a global disaster at the same time. As an author of startup fiction myself, I'm thrilled to see The Term Sheet burst onto the scene. After just a few pages you'll find you can't stop.

Good story and a good narrator. This story is a bit out of my normal reading style but I enjoyed it.

I made it through the book, because I don't like giving up. I kept waiting for it to go somewhere but it was just flat.

The reader was fine, but the characters were thin, underdeveloped, and unlikable.

Do you think The Term Sheet needs a follow-up book? Why or why not?

Even though there were several unexplained parts of the story, since the main characters were not really likable, it would be best to start over.

The writer had the makings of a good story, but it seems he was more interested in talking about Portland and coffee than deeply developing the main characters.

The thing I liked most about this novel was the way the author captured the emotions of starting a new company and dealing with family, friends, and failure. This was one of the more enjoyable books I have listened to recently. I only wish it were a little longer.

What other book might you compare The Term Sheet to and why?

Eliot Pepper's Uncommon Stock series, because it is also related to startups, told from a fictional point of view.

This was my first time to listen to Jeffrey Kafer. I like the way he performed different voices (e.g., male/female) and would definitely consider listening to this narrator again.

The interactions between the main character David and his sister.

I received this book from the author in exchange for an honest review. I definitely hope the author continues to write novels in this genre (startup thrillers).

Would you consider the audio edition of The Term Sheet to be better than the print version?

I definitely consider the audio version much better than the print version. This is due to the talent of Jeffrey Kafer. He captures the story exactly how I read it, and adds a unique flavor to the concept in his telling.

David Alexander. Mr Carlson (the author) makes him seem like a close friend, one you have known forever. Jeffrey Kafer (narrator) brings him to life in a way that the author would surely approve of.

Mr Kafer does such an excellent job of narrating that deciding on a favorite character is difficult indeed. I would have to stick with the protagonist, David Alexander, although all are quite good.

After reading and reviewing "The Term Sheet" as an eBook, the author offered me a chance to listen to the audio version. Although it was free in audio form, I would definitely buy it if he hadn't.

Would you consider the audio edition of The Term Sheet to be better than the print version?

It was especially entertaining

I thought his performance was excellent. The tone of his voice changed with the characters and his inflection was good.

I received the book for free

This audio book was very hard to put down and I did not want any interruptions while listening to it. Like when I read the book, I did not want to be disturbed while reading it.

What does Jeffrey Kafer bring to the story that you wouldn’t experience if you just read the book?

He brings the characters to life in ways to enhance what Lucas the author has done in his writing.

I received an advance copy of this audio book in exchange for my review, but that did not sway my feelings toward it in anyway. I listened with an open mind and this review was done accordingly.

The characters are interesting and the story development is excellent. The twists and turns in the plot are fascinating.

What other book might you compare The Term Sheet to and why?

This book deals with technology issues; it doesn't compare with other books I've enjoyed. It is similar to the move "The Net", which involves high tech.

I have not listened to Jeffery Kafer in the past. However, I thought his performance was excellent. The tone of his voice changed with the characters and his inflection was good.

Yes! It was difficult to put it down. A real page turner! I look forward to the next book by this author!

If you could sum up The Term Sheet in three words, what would they be?

I'll surely recommend this book if anyone wants to know more about how startups work, how much one should suffer before grown up, how well our passion should be, how good is our idea, how to think about others perspective.