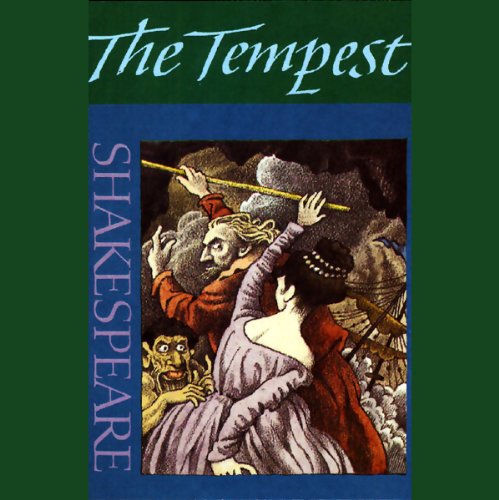 Is Shakespeare hinting at the end of his own magnificent career in these and others lines spoken by the great magician, Prospero? The Tempest was the last of Shakespeare's comedies, completed just before he retired to his native Stratford-upon-Avon; perhaps this delightful comedy was intended to signal the playwright's farewell to his beloved theater. The Tempest reflects Shakespeare's mature genius, with its story of innocence tempered by intrigue, hilarity bounded by melancholy. Audiences the world over still thrill to see The Tempest's dark comedy and magical fantasy.

Sir Michael Redgrave and Vanessa Redgrave helped to build one of England's foremost theatrical families, a tradition that Ms. Redgrave continues today. And Hugh Griffith is one of the nation's greatest character actors. Together, they bring The Tempest majestically to life.

What listeners say about The Tempest (Unabridged)

I will qualify my review with the following: This was the first audio book I have completed, and I have not seen "The Tempest" as a production.
I enjoyed this audio book. It helped me to understand the characters and setting better than simply reading the play from a written book. It could be helpful to have Act and Scene information announced as the book progresses. The sound effects (sea waves, music for Ariel) served to promote understanding of the play's content.

This recording is an excellent resource if you are looking for a more exciting and comprehensive telling of Shakespeare's play than your own voice in a variety or variations.

I had to read The Tempest for my first year English class this term and it helped me read it fast and with coherence. It reminded me so much of listening to the recordings in high school and helped a lot! Try it out! It's a great play.

I was disappointed with this despite the high-falutin' cast.

This is obviously a theatre (or at least a theatre production's) recording.
Though interesting to hear the play in a very old-skool traditional way, the
dynamics of the recording were meant for a large room (or onstage, natch). Unfortunately as an audiobook the levels were just jarring. Painfully so at times.

If you have set your volumis for comfortabley listening to, say, Prospero (wonderfully done by Michael Redgrave) you will be blown out of your skin with the abrupt banging, clattering, raging and yelling.
Not just the shipwreck either. That could be handled by turning it down for the 1st scene then back up for the rest pf the play.

Alas, Caliban is just too much; too loud, too one-noted. A shame because Caliban has some great speeches.
I couldn't fairly judge this or the otherr performances because of the harsh volume ups and downs were too annoying and distracting.

I wish that some "rough magic" would be performed on this recording in order to balance out the audio levels.

A thoroughly delightful version of Shakespeare's play, highly recommended. Hugh Griffith almost steals the show as Caliban. At a brisk two hours, this recording of the magical play flies past.