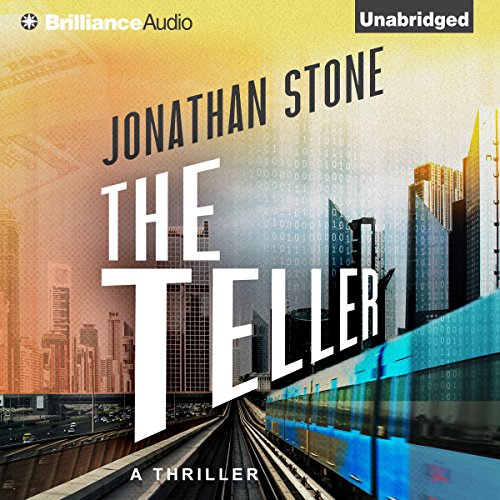 Twenty-three-year-old Elaine Kelly doesn't earn much as a bank teller, and most of her salary goes toward caring for her terminally ill mother. When a lonely old man who deposits money at her bank every week gets hit and killed by a delivery truck, Elaine - a good Irish girl from Queens - thinks she's found the answer to her problems. She'll just transfer $1 million from the dead man's account into hers.

Except that the lonely old man may not have been who he seemed. And when you take $1 million that isn't yours, it can cost you…way more.

Acclaimed author Jonathan Stone's pulse-pounding thriller takes listeners from the darkest corners of New York's financial empire into a shadowy hierarchy of wealth and power. The Teller follows the money - and takes listeners along for the wild ride.

Lots of twists and turns

The story keeps going in directions that I would never have anticipated. I love plots that I can't predict.

Loved this...this was one of those books people say you could not put down. I couldn't. I recommend this book to anyone looking for a great read, a fast moving , exciting read. You will not be disappointed!

First half great; second half sucked.

Listening to the first half was terrific. Our heroine, the virginal, Irish Catholic bank teller Elaine Kelly is a wonderful young woman, kinda shy, who in a moment of horrendous temptation, steals $1.3 million in a couple of key strokes. The first half of the book is the product of a great writer and a great reader. It is really hard to believe that the second half of the book has been written by the same guy. The second half deteriorates, as other reviewers have noted, into a bloody awful mess. The theft wreaks utter havoc on Elaine, and takes her through a nightmare of tortures populated by Euro-thug gangsters, a bank CEO who is the bottom in a maelstrom of sadomasochistic perversion, and adventures that belong in a comic book aimed at impressionable thirteen-year-old boys.

I think I will give Jonathan Stone a rest. I bought "two for the show," but the plot seems to be quite literally lifted from that of another, eerily similar book, in which the researcher for a Las Vegas style "mentalist" spends his time investigating every person in the audience, so that the showman can astonish them with his supernatural knowledge of their lives. Hooey.

Do you think The Teller needs a follow-up book? Why or why not?

Heavens no. It's time, as the Monty Pythons used to say, for something completely different.

Wow. And not in the good way.

While I love Jonathan Stone's characters (they're complex and inexplicable the way real humans usually are), this one was hard to swallow. While I have to admire the ability to construct such a story, it just really doesn't seem like this could ever really happen in the real world. There's not much I can say about this without total spoilers, but I'll try. It'a the story of a bank teller who hastily and almost unthinkingly transfers money from a man's account because he just died outside the bank, and the troublesome consequences that follow that action. Since I don't know enough about how the legality of illegal money transfers work, I guess I can't say that it was ridiculous how it ended, but it really was. I loved Moving Day and bought this without reading the reviews. I'd best not do that again.

Nice juxtaposition between Catholic guilt and professional international criminals. "Good Girl" commits an impulsive financial crime and is drawn into sordid criminal band. I enjoyed the "counterpoint" in the story. The first half of the book, though, was better and better written. Fast paced. I recommend.

Well, I was entertained...

Its a fun and fast read. Its not believable and on the verge of trashy, but I was drawn into the story and couldnt quit listening. If you ever saw the Goldie Hawn movie, Foul Play, this reminds me of that fun farce of a story. Its not meant to be funny, but it is the same sort of adventure.

Yes, yes, things happen that are totally unrealistic. And yet, I found the book to be quite entertaining. Like with "Moving Day," I couldn't wait to hear what happened next. Can't wait for more from this author.

Great first half and then it gets seriously silly

The Teller starts off like its going to be an excellent novel. The second half of the book is just a crazy jumbled mess. The book gets some credit for the first use I have ever heard of the word "devirginated", a real word my dictionary informs me. It's used twice. I generally like Jonathan Stone books, but not this one.

What disappointed you about The Teller?

It pulled me in almost immediately but then...then...the storyline went way off track. Narrator irritating and def contributed in my inability to finish the last 2 hours.

Why is this author puublished? Story is sooooo slowwww. Character development non-existent. No plot. Waited and hoped, but nothing happened except gratuitous Sadomasochism, wandering thoughts and words. Overwritten, words, words and more words. Boring..... yawn....Zzzzz