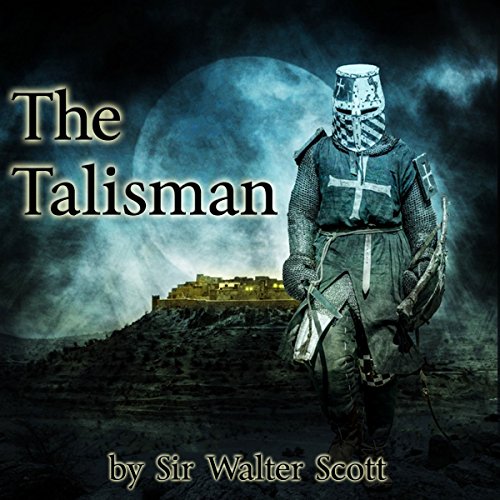 By: Sir Walter Scott
Narrated by: Jim Killavey
Try for £0.00

Written in 1825 by Sir Walter Scott, The Talisman is an epic throwback tale of connivers, deceivers, lovers, and heroes.

Set in the Holy Land during the bloody 103-year battle of Christians and Muslims during the Third Crusade, and narrated with steady aplomb by Jim Killavey, the listener is taken along on sprawling adventure that follows the triumphs and tribulations of the Scottish knight Sir Kenneth, as he clashes and duels with his twisted foe, Sultan Saladin.

A "historical" novel that plays liberally with "facts", The Tailisman is nevertheless a solid and spirited yarn.

The Talisman is Sir Walter Scott's tale of the Crusades, a tale of chivalry, of violence, of virtue, romance, and deceit.
© and (P) Jimcin Recordings
Classics Genre Fiction
Show More Show Less

What listeners say about The Talisman

Has anyone else listened to this recording?

Would you try another book written by Sir Walter Scott or narrated by Jim Killavey?

Has The Talisman put you off other books in this genre?

Most of the second half of this novel is missing. The narrative skips abruptly from Trial by Combat to the Court of Salladin. My download seems to think its complete.

You need long stretches of time for this book,

First let me say that I did not read the trade revues of the other reading of this book. I am glad that I did not because they lay out the plot in great detail! The book is quite long and at my first attempt at reading I abandoned it after a little more that one hour. The language is very elaborate and florid and there seems to be no discernable plot. Some time latter, faced with a ten hour drive I decided to try again, I am very glad I did. The plot moves very slowly because of the elaborate dialog but it still held my attention with many unexpected twist and turns. You get used to parsing the long and elaborate sentences and they turn out to be quite charming as often it is the characters chastising each other in very polite terms. I also found interesting the portrayal of the European Code of Chivalry with the portrayal of the Code of Honor for the Warrior class in Japan as presented in the Otori Trilogy. I will listen to this book again when I have long stretches of time available, I am sure I missed many important clues in the early part. My ranking went from a one star to a five star.

would have been a good book

What disappointed you about The Talisman?

The recording skips the climatic chapter.

The recording skips the climatic chapter.

The Talisman by Walter Scott read by Killevey

I enjoyed both the reading and the book to such an extent that I was disappointed when at the very climax the book skipped a chapter or two and went to the last few pages of the book. It was easy to fill in what had happened, but I would rather have been able to listen to the whole book. There is a serious flaw here and I have reported it and hope the audio book people correct the error.