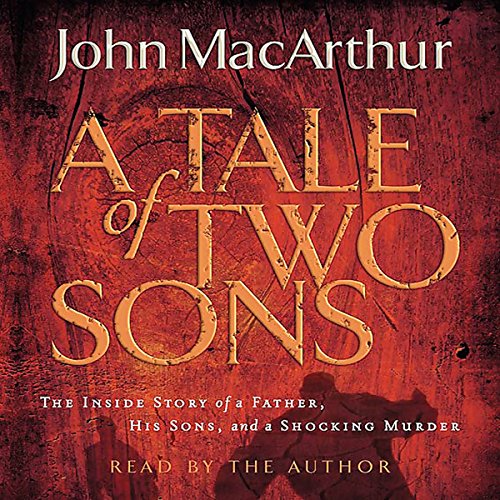 The Tale of Two Sons

The Inside Story of a Father, His Sons, and a Shocking Murder
By: John MacArthur
Narrated by: John MacArthur
Length: 3 hrs and 33 mins
Categories: Religion & Spirituality, Christianity
5 out of 5 stars 5.0 (2 ratings)

The Tale of Two Sons

Nearly 2,000 years ago, Jesus told a simple parable about a family...a father and his two sons. It was a story of rebellion, repentance, and unfathomable grace. The Parable of the Prodigal Son still stands out as a crucial lesson about our struggle with sin and dependence on divine salvation. But there is a part of this story that often goes untold. It's a message you need to hear.

This powerful audio provides fascinating new insight into one of the Bible's most important stories. Using accurate and captivating historical context, John MacArthur invites you to hear the Parable of the Prodigal Son as it was originally intended. You are about to experience a tale of inexhaustible grace and an ending you've never heard before.

What listeners say about The Tale of Two Sons

When this book came along, my favorite of Jesus' parables, which is so overflowing with grace, acceptance, and forgiveness, I wanted to hear what this book had to say. This story seems like it is contrast to some of the emphasis that has come from John MacArthur.

This book portrays this story for what it is -- an almost unbelievable scandal in its day. The actions of the son are the actions of a scoundrel, deserving endless punishment. While terrible, we know this young man -- he wants it now, and doesn't care how cruel he is to his father to get it.

But the real scandal is the father -- his love and forgiveness is unexpected, undeserved, and not fair. He should punish this son -- not restore him, and certainly not celebrate him. The older son understands this, which is why he refuses to enter into celebration.

This book shows the context and plain meaning of the parable -- and how this story, which seems sweet and touching to us, was the kind of thing that Jesus said that caused the religious leaders to have him executed.

I did find a few things to disagree about -- this may say more about my critical attitude than any real issues. But this story of redemption shines brightly through the lens of John MacArthur's pen, who sometimes seems to me too narrow in his thinking and somewhat harsh.

I am surprised and overjoyed to say that I can unreservedly recommend this book to any one who trusts Jesus or is curious about what he taught. This story captures the heart of of his ministry, and this book opens it up to the modern reader. A beautiful story even without the background and explanation of the original text -- it becomes a rich study in how God chooses to relate to the world, and his sadness when his joy is rejected by the religious.

As only he can do!

MacArthur digs deep into the culture of the ancient near east in order to explain this parable of Jesus Christ teaching.It is a tremendous read.

Excellent analysis of the parable, mind blowing yet so obvious ending. How did I miss that? :) Very blessed by reading this book

Great book about a great parable. Half way through I thought “This narrator is really good.” Then I realized it was narrated by the author, so makes sense. MacArthur brings the parable to life and shows you the biblical Gospel.

Pastor John MacArthur made this Parable come alive for me. I understand it so much better than I had before in my 35 years of walking with the Lord. Thank you Pastor MacArthur for your faithful labors with this passage of scripture!


eye opening truths in this often referred to parable! jmac takes it apart so completely so that the fine point of the scalpel of truth can prick at your heart.

When I read a book, I am looking for new insights. I want to learn something that I have never heard before. While there were a couple fantastic moments in this book, I found it to be mostly a regurgitation of of the lessons that I have heard in the church over the course of my life. I think those who are new to Christianity will find it to be rather distant and unrelateable, and those who have been in church for many years will find it to be repetative.

listened for a few seconds, realized it's abridged, and deleted it from my device. I personally can't stand mutilated books and am frustrated I missed that fact and wasted my money on it.