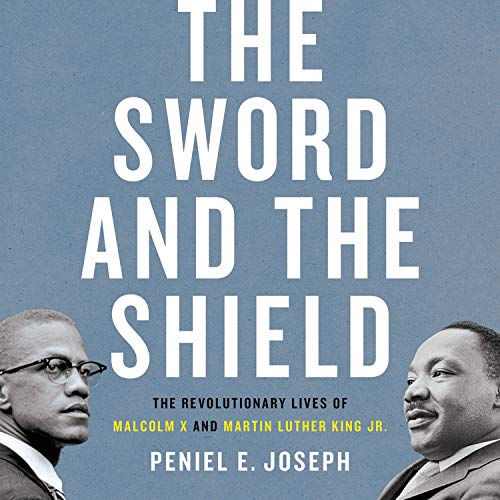 The Sword and the Shield

By: Peniel E. Joseph
Narrated by: Zeno Robinson
Try for £0.00

This dual biography of Malcolm X and Martin Luther King upends longstanding preconceptions to transform our understanding of the 20th century's most iconic African American leaders.

To most Americans, Malcolm X and Martin Luther King Jr. represent contrasting ideals: self-defense vs. nonviolence, Black power vs. civil rights, the sword vs. the shield.

The struggle for Black freedom is wrought with the same contrasts. While nonviolent direct action is remembered as an unassailable part of American democracy, the movement's militancy is either vilified or erased outright.

In The Sword and the Shield, Peniel E. Joseph upends these misconceptions and reveals a nuanced portrait of two men who, despite markedly different backgrounds, inspired and pushed each other throughout their adult lives. This is a strikingly revisionist biography, not only of Malcolm and Martin, but also of the movement and era they came to define.

What listeners say about The Sword and the Shield

This is a soaring analysis of the public lives of two of the most controversial and misunderstood Black public figures in 20th century America. For anyone who rightly suspects their legacies have been distorted and whitewashed since their assassinations in the tumultuous sixties, this book sets their records straight.

I very much enjoyed the juxtaposition of the two leaders and how do you for managed to maintain a historical view rather than spouting opinions.

I really enjoyed learning about the struggles of black equality and X and King's involvement at a pivotal time in American history.
I'm not going to knock the narration too much though I have to ask why does the narrator feel the need to impersonate the spoken words of the subjects? I found it quite bizarre.
would 100% recommend.

The Civil Rights Era was made up of many more people than Martin Luther King Jr and Malcolm X, but they are two of the defining figures of the mid 20th century. This is the first joint book I have read about them since James Cone's Martin & Malcolm & American. It has been at least 20 years since I read that book, and throughout The Sword and the Shield, I tried (and failed) to remember how Cone handled the discussion. I need to go back and reread it.

I was glad that I have recently read a biography of Malcolm X as well as King's last book, Where Do We Go From Here, which had details about their lives front and center in my mind. I am far from a scholar of either, but I am also not unfamiliar with them. I still learned plenty, and the focus on them together does intentionally put their work on tension even if they only directly met one time.

As much as anything this is a reminder of what was lost with their deaths. No one like Malcolm X and Martin Luther King Jr is only their flattened memories. Both were complex people that were significantly changing over time, as was the central theme of Marble's biography of Malcolm X and Cornell West's compiled Radical King. Kendi's three categories of racial relationships (segregationists, assimilationists, or antiracists) in How to be an Antiracist reminded me of how both King and Malcolm X were antiracists much of the time, but in quite different ways.

Another theme of the book that was striking was how Peniel pointed out how both frequently framed their work as helping African Americans to become citizens. It was still six months after Malcolm X was killed that the Voting Rights Act of 1965 was signed into law and making a significant impact on the reality of Black citizenship. A citizen that cannot vote is not wholly a citizen. That was far from the last point of disparate realities between racial groups' citizenship. Still, it was a stark reminder of how many are citizens (then and now) that cannot act on their citizenship for a variety of reasons, many of them due to systems that intentionally want to minimize minority citizenship.

The recounting both stories is well done and well balanced. They were very different men, and that is probably not paid attention to enough. Martin Luther King Sr was the highest-paid Black preacher in Atlanta. When Martin Luther King Jr moved to Birmingham, his first senior pastorate, he became the highest-paid Black pastor in Birmingham. Malcolm X's father died when he was young; his mother was placed in a mental asylum when he was a preteen. While King was in college early and finished with a PhD at 25, Malcolm X was paroled at 26.

There is too much to talk about here, and I listened to this (mostly while doing yard work when I didn't have an easy ability to take notes.) I need to read it again, but first, I need to re-read Cone's book.

Great audio book, only criticism being awful decision to have narrator imitate MLK's and Malcolm's voices when reading some of their many memorable quotes. (The attempts to mimic King's legendary sing-song oratory were particularly embarrassing.)

Many of the people losing their minds over BLM would be stunned to know how much they think and sound like King's critics *post* the March on Washington. (I'm especially speaking of the ones who try to show how progressive they are by posting King's most cheerful quotes from Pinterest while remaining blissfully unaware of his many biting ones.)

It's interesting to think: Spike Lee's great "Malcolm X" has probably given those whites who dared to watch a more holistic view of him than anything they've *heard* about King, who seems to have been distilled down to those aforementioned sunny quotes. They should read this to understand that King's "I Have a Dream" speech was just that, a dream, and when he realized few whites were interested in ceding supremacy to make it a reality, he showed himself to be as ferocious a fighter for civil rights as Malcolm -- and with plenty of fiery rhetoric of his own.

The Sword and The Shield

The Sword and the Shield is the first and only book to put the relationship between Martin Luther King Jr and Malcolm X in its proper perspective. As one who was fortunate enough to hear them speak when they were alive, I want to thank Peniel E Joseph for his well written and insightful book.

I learned a lot from this book. I didn't know much about Malcom X and how his interactions with MLK Jr really were instrumental in the black movement. I wish more of black history like this is shared in High School and College History classes. Also spoke of other influences in the black movement. This book is relevant to current history.

Peniel Joseph gives an excellent overview of the lives, philosophies and civil rights careers of MLK, Jr. and Malcolm X. It was fascinating to learn about them chronologically and to see how they developed in comparison along a timeline. I was also introduced to James Baldwin as a fellow activist, opening my eyes to yet another interesting and important African American I never learned about in school.

One of the best books of the last 10 years.

This should be required reading for anyone who wishes to understand 20th century history, Black history, the horizon of possibilities before the country and just about any social science field there is.

I knew what the mainstream wanted you to know about Malcolm X and Martin Luther King Jr. This was an amazing introduction to these amazing men.

Dr. Joseph did an excellent job of depicting the convergence of two black world views represented by Malcolm and Martin. I appreciate the maturation journey both men took throughout their short time with us. We should value the fact they were both closer in ideology and strategy to better their constituents and the larger world vs what we have been lead to believe.

A history worth remembering

A incisive look at the two men who shaped the struggle for Black liberation that continues today. While we know much of King's story, we don't know Malcolm's as well. One of the strengths of the book is showing how they not only grew closer in their understanding of one another, but how King became more radicalized toward the end of his life, drawing much closer to Malcolm's beliefs. Tremendously researched well written.

Feeling I knew about these men, I didn't expect I to learn. I was wrong, a knew far too little about either!
This audio book opened my eyes, I learned and will be the change I want to see.