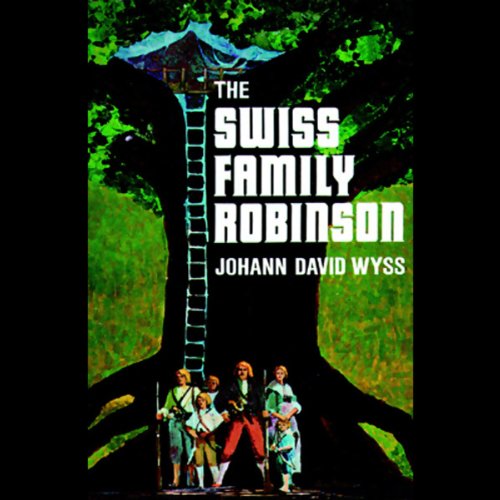 By: Johann David Wyss
Narrated by: Frederick Davidson
Try for £0.00

"For many days we had been tempest-tossed...the raging storm increased in fury until on the seventh day all hope was lost." So begins this delightful adventure story. The Robinson family, a Swiss pastor, his wife, and four sons, will emerge alive from this terrible storm, bringing to land two dogs and a shipload of livestock: hens, pigeons, and geese.

Inspired by Daniel Defoe's Robinson Crusoe, this uplifting tale relates a family's ingenuity and courage as they struggle to survive on an exotic tropical island.

What listeners say about The Swiss Family Robinson

What would have made The Swiss Family Robinson better?

A different narrator. You cannot change the story but the narrator read this as a diary not a novel. Perhaps this was as it was meant to be read but a less conceited and pompous approach with a more interesting narrator would have been a great improvement.

What was most disappointing about Johann David Wyss’s story?

Not disappointed in story, wanted to read the original as opposed to the Disney Film version.

Who might you have cast as narrator instead of Frederick Davidson?

Davina Porter for one. I am amazed at how many voices she can do and how she injects feeling into the narrative (Diana Gabaldon novels).

What disappointed you about The Swiss Family Robinson?

Almost everything ,the basic idea of a family of Robinson Crusoes on a desert island is a good one but oh boy! Didn't he get it wrong

Would you ever listen to anything by Johann David Wyss again?

Not if it is on this level

Would you be willing to try another one of Frederick Davidson’s performances?

Not if I was paid to listen,he was dreadful.A would be Brian Sewell soundalike who pronounced shone to rhyme with mown.He also kept pausing when a pause wasn't called for,asthma or lack of technique ?to call his voice pompous& boring would be an understatement

If you could play editor, what scene or scenes would you have cut from The Swiss Family Robinson?

Every new animal,bird,reptile or whatever the first reaction even among the children was to kill it,I'd edit all those out.Every subject under the sun that was mentioned Papa was a world class expert on it & gave the reader/listener a full lecture on it,boring & incredibly irritating.

I read the book many years ago when the glaring improbability of the story didn't register with me.A tropical island with animals who didn't belong on the same continent let alone an island.The same island is almost a floating supermarket everything you need on the shelves.A man who although his actual calling is never mentioned is a genius at everything he attempts,I was expecting him to instal double glazing & Central heating at any moment.A awful,unbelievable piece of tripe.

"Mom - quick, go to the audible website and give this one 5 stars. I loved it!"

The story is a classic and well worth listening too. My son really got into it and started looking for excuses to go for car rides (which is where I keep my iPod). The only fault I can give is in technical merit... there are numerous repeats, some up to a minute long. If not for that, this would be a five star review.

which extols the virtues of moral behavior toward other humans and animals as well as industry and critical thinking in tight situations. Wyss devised this novel as something of an instructional manual for right living, a kind of didactic Robinson Crusoe, to be read and followed by his sons, but the wonderful adventure makes this also an entertaining and enjoyable read. A great classic for both children and adults!

One of my favorite books of all time

Would you listen to The Swiss Family Robinson again? Why?

Sure. I love this story and have read it several times as a child and as an adult. I purchased the audio book to keep up with my son who is reading the book for school. It is unabridged, as far as I can tell, and has chapter divisions the same as other less edited versions of the book (44 chapters, rather than the 20-something in some other versions) which makes it easy to follow along.

There are tons of reviews who are quick to point out how horrified the reviewer was by the blatant sexism and the overt "christian-y" tones, not to mention how the family seems to kill practically every animal it comes in contact with. To this I say, get over it - if you can. There is so much to this story that is lovely and educational and inspiring. If you are truly offended that the Mother does all the sewing, doesn't go on all of the adventures and never has a name (The Father never has a name either, funny how that never pops up in any reviews) or that monkeys die, or that kids have (gasp) guns that they use, then this book is not for you.

I chose this version because it was not abridged and because the chapter divisions matched the chapters in my print version. The narrator was a second thought, but it turned out pretty well. You can hear the papers in the background and there are some awkward pauses, but his accent is a nice touch.

As a child, I loved this book because I wanted a pet monkey and to live in a tree house and a crystal cave. As a mother re-reading this book ( who would also still love to live in a tree house, but no monkeys, please) I was particularly moved by the beginning of the book when the father seems to accept that he and his family were maybe going to die in the storm that was destroying their ship around them. I don't remember who said it, but there is a quote I read once about how a great book grows with you, and that you should read a great book as a child, as an adult and then again when you're old - it is certainly true with this book.

This book is not politically correct. It isn't even biologically correct. It's not a survival manual, it's not a realistic portrayal of hardship. It's a fairy tale; a lovely story about a family living on a magical island without the interference of society. I would move to New Switzerland in a heart beat and take my sons (and livestock, tools, seeds, etc. with me.)

A literary classic, but I was disappointed.

The story disappointed me because things always seem too convenient and coincidental. I guess I'm just used to a little more hardship and struggle for this to appear realistic.
Don't get me wrong, I enjoyed the story, and was able to stay interested, but I guess it just was not _compelling_.
I also found the reader to be a bit dull, probably a good choice for a classic, but I think the story would benefit from a different reader, which are available here.

WARNING-This versos is not UNABRIDGED as it states

We listened to this while following along with a hardcopy unabridged version. The chapters are differently sectioned on the audiobook and sometimes several paragraphs are skipped. We now must find an actual unabridged audiobook.

A Classic for Young Men

First off, Frederick Davidson is an incredible reader. I love his voice and cadence a lot.

This book is a must read for young men. It is filled with all the things a boy loves as a child. Brotherhood, adventure, danger, survival, providing for those you care about and forming structure out of the chaotic world around you. I believe this book is as good a guide to how to live as it is an entertaining story.

The only reason I gave the story 4 stars is due to some of the comically ridiculous fortune the family has which gives it a very lighthearted aire while losing some of the realism. They find dozens if different kinds of animals and manage to train and feed off of them as easily as dogs and chickens and it is hilarious.

Love this book, would highly recommend.

it's wonderful because this book is over 100 years

we could only read a little at a time and we laughed a lot as animals from every continent in the world appeared on this island! nonetheless it was fun to read and somewhat educational. The old English was great!

Snobbish voice without character tones; my boys were so bored! It put everyone to sleep!

Great story and narration. The narrator captures the feel perfectly. Back when good, wholesome fiction was the standard.