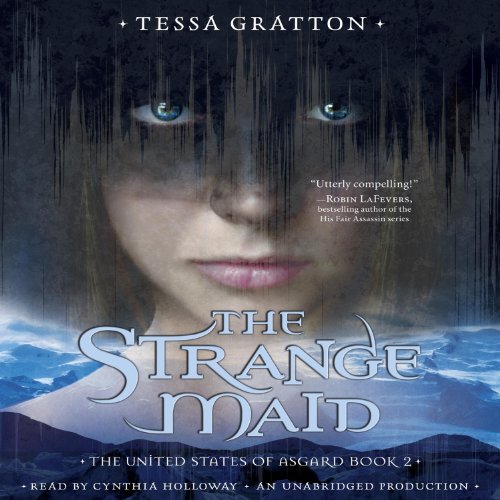 By: Tessa Gratton
Narrated by: Cynthia Holloway
Try for £0.00

Fans of Neil Gaiman, Holly Black, and Maggie Stiefvater will embrace the richly drawn, Norse-influenced alternate world of the United States of Asgard, where cell phones, rock bands, and evangelical preachers coexist with dragon slaying, rune casting, and sword training in schools. Where the president runs the country alongside a council of Valkyries, gods walk the red carpet with Hollywood starlets, and the U.S. military has a special battalion dedicated to eradicating Rocky Mountain trolls.

Signy Valborn was seven years old when she climbed the New World Tree and met Odin Alfather, who declared that if she could solve a single riddle, he would make her one of his Valkyrie. For 10 years Signy has trained in the arts of war, politics, and leadership, never dreaming that a Greater Mountain Troll might hold the answer to the riddle, but that's exactly what Ned the Spiritless promises her. A mysterious troll hunter who talks in riddles and ancient poetry, Ned is a hard man to trust. Unfortunately, Signy is running out of time. Accompanied by an outcast berserker named Soren Bearstar, she and Ned take off across the ice sheets of Canadia to hunt the mother of trolls and claim Signy's destiny.

What listeners say about The Strange Maid

I went into The Strange Maid knowing that I probably wouldn't love it as much as I loved the first book in the series The Lost Sun, which I loved with an almost inexplicable fervor, and I was okay with that.

Tessa Gratton's newest book in The United States of Asgard series follows Signy Valborn. Signy was chosen by Odin the Alfather himself to be a Valkyrie when she was a child. Now grown, she must prove herself before she can take her place on the Valkyrie counsel by solving a riddle. Its answer eludes her.

The Strange Maid begins before the events of The Lost Sun and eventually reaches beyond Baldur's return. It answers a plot point that was never really resolved in The Lost Sun: what of all the trolls that attacked while Baldur was missing? Signy's riddle is the answer to this question. She and a motley band, including a poet, Soren Bearskin, and several Berserkers, seek the answer to her riddle by stopping the troll attacks.

When reading a series, it's hard when the second introduces a new main character when you loved the characters in the first so much. I was immensely glad when Soren finally showed up on the scene. I like Signy too, but she is, in many ways, the opposite of Soren. She embraces Odin's madness and has a violent streak to her. She is ambitious and eager to bring back the old ways.

The writing itself is beautiful, and I love how Tessa Gratton combines the poetry and myth of old with a modern society. I love how the past and the present are connected in this story. The tale of Beowulf and those of the ancient Valkyrie resonant and are mirrored in the modern setting. It's a really lovely construction. I'll definitely continue reading this series.

Fans of Tessa's
first book will not be disappointed by the second, a book that is much darker, and far more complex than you might initially think. Cynthias narration is different from bk 1, with the male narrator being missed at first, but she becomes each character so completely that she is perfect for the roles.