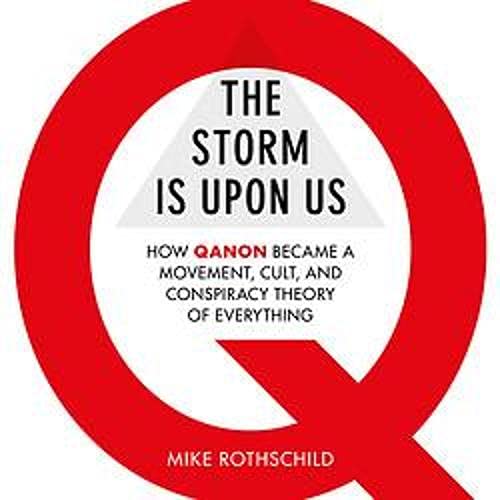 The Storm Is Upon Us

By: Mike Rothschild
Narrated by: Joe Barrett
Try for £0.00

In 2017, President Trump made a cryptic remark at a gathering of military officials, describing it as 'the calm before the storm' - then refused to explain himself to puzzled journalists. But on internet message boards, a mysterious poster called 'Q Clearance Patriot' began an elaboration all of their own.

Q's wild yarn hinted at a vast conspiracy that satisfied the deepest desires of MAGA-America. None of Q's predictions came to pass. But did that stop people from clinging to every word, expanding Q's mythology, and promoting it ever more widely? No.

Conspiracy culture expert Mike Rothschild is uniquely equipped to explain QAnon, from the cults that first fed into it, to its embrace by Trump and the right-wing media. With families torn apart and with the Capitol under attack, he argues that mocking the madness of QAnon will get us nowhere. Instead, he argues that QAnon tells us everything we need to know about global fear after Trump-and that we need to understand it now, because it's not going away.

"An ideal tour guide for your journey into the depths of the rabbit hole that is QAnon, and even shows you a glimmer of light at the exit." (Cullen Hoback, director of HBO's Q: Into the Storm)

What listeners say about The Storm Is Upon Us

This book is simply fantastic and illuminating. It really discusses Q in a understands way, but not dehumanising though. It’s well researched and gripping throughout. I would recommend maybe learning a bit about the alt-right (check out From 4Chan To White House) as it leads nicely into This, yet very different.
Highly recommend, especially at this time.

laying out its history on relation to relying on anti semitic tropes and pandering to racists the book charts how Q sucks people in with vague predictions and the devastating impact its bonkers worldview had on friends and family of Q adherents.

Did his own research

This is a well written and well researched book which covers a lot of the Q movement. A movement that is so complex and diverse is impossible to fit into one book but the author does a fantastic job of summarising all of the main points. I would recommend this book to people who only have a passing knowledge of Qanon and those familiar with the movement alike. Also listen to the audiobook version if you want to hear the most endearing attempt at an Australian accent.