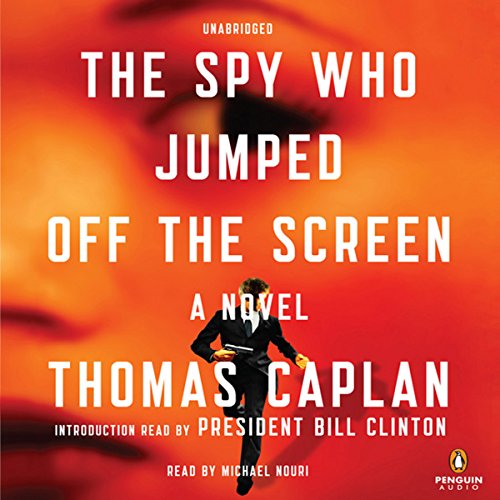 The Spy Who Jumped Off the Screen

By: Thomas Caplan
Narrated by: Michael Nouri
Try for £0.00

This gripping thriller from Thomas Caplan propels listeners around the globe - from Hollywood to Rome, the Black Sea to the Mediterranean - and to the very brink of a nuclear abyss. The novel's charismatic hero, former covert operative Ty Hunter, has become, almost by accident, the number-one film star in the world. When he is recruited on a clandestine mission to thwart the transfer of nuclear warheads into rogue hands, he must deploy every skill he has as an actor, soldier, and spy.

Donning his fame as a disguise, Ty matches wits and muscle with the enigmatic billionaire Ian Santal and his nefarious protégé, Philip Frost - two supremely sophisticated adversaries - even as he falls in love with the entrancing young woman closest to them both, the jewelry designer Isabella Cavill.

In prose that is both elegant and powerful, The Spy Who Jumped Off the Screen gives us a breakneck parable of good and evil - and a hero in the tradition of James Bond and Jason Bourne, who is sure to become an icon of the genre.

"There is wisdom as well as considerable pleasure to be extracted from the stylish, involving, utterly contemporary puzzle that is this novel.… The Spy Who Jumped Off the Screen will keep you under its spell and stiffen your resolve to make the world a safer place for our children." (President Bill Clinton, from the Introduction)
"Thomas Caplan has crafted an absorbing thriller of intrigue and menace that draws you into a vortex you can't escape until the end. The Spy Who Jumped Off The Screen is the most ingenious thriller I''ve ever read." (Clive Cussler)
"You’ll believe Caplan’s well-constructed, globe-trotting story—and that his hero has the goods to save the day." ( Los Angeles magazine)

What listeners say about The Spy Who Jumped Off the Screen