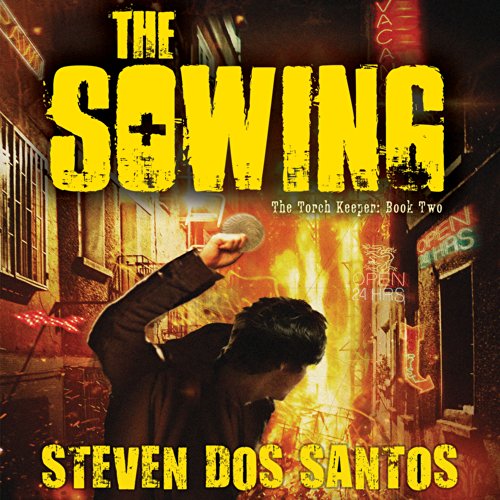 By: Steven dos Santos
Narrated by: Josh Hurley
Try for £0.00

This time, there are no choices.

Lucian "Lucky" Spark leads a double life. By day, he trains to become one of the Establishment elite. At night, he sabotages his oppressors from within, seeking to avenge the murder of his love, Digory Tycho, and rescue his imprisoned brother.

But when he embarks on a risky plot to assassinate members of the Establishment hierarchy, Lucky is thrust into the war between the Establishment and the rebellion, where the lines between friend and foe are blurred beyond recognition. His only chance for survival lies in facing the secrets of the Sowing, a mystery rooted in the ashes of the apocalyptic past that threatens to destroy Lucky's last hope for the future.

Perfect for fans of Suzanne Collins and James Dashner, the fast-paced action begun in The Culling continues in The Sowing.

What listeners say about The Sowing

Whew! I thought the Hunger Games were Dark Times

First off, I love Josh Hurley's voice. I loved his performance and his narration. He is absolutely Sparks to me. Second off, I enjoyed this dark, broken world of corruption, greed, selfishness, brutality and love, and the sacrifices you make for love. I thought the Hunger Games were dark time, this story makes Hunger Games seems like child play.

I haven't listened to book 1 yet but I'm holding off because after listening to this one, as amazing as it was, I needed to hear something a lighter. Man, this story had my heart in a twisted vine the whole time. I'm actually desperate for Book 3 now.

Wonderful narration to a story that will definitely have you intrigued and holding your breath with every word.

Steven Dos Santos has done it again with an incredible sequel to The Culling. I was enthralled by this book. The only negative was the narrator. A bit exaggerated and over-the-top in his characterizations, the reader was at times annoying. But the story and text were too compelling to have me turn it off. I would have listened to this in one sitting if I had started it sooner in the day. I was compelled to listen to this in two days. Bravo Mr. Dos Santos in another chaper in the Torch Bearer Trilogy. Can't wait for the next installment!