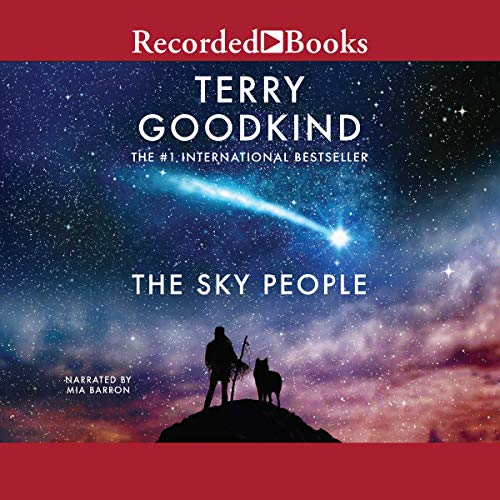 Raging River, priestess of the Sun People, has just done the unthinkable.

The Sun People are bound by an ancient law, left by the long-vanished Sky People: They must never kill. To other tribes, who have no such law, the Sun People are easy prey who will not defend themselves. Their game is poached, their stores raided, their women abducted, their men are killed for sport.

But when Raging River and her sister are attacked by a Wolf People raiding party, River fights back and kills one of the warriors. Worse, she has killed the son of their chief.

Now, with the Wolf People vowing revenge and her people facing annihilation, River must do the impossible. She must prove herself as priestess. She must find the mythical Sky People.

The Sky People is a fast-paced novella of revenge and redemption that explores new territory for number-one international best seller Terry Goodkind.

What listeners say about The Sky People

Loved the book, good storyline. Terry Goodkind is one of my favorite authors. This was my fault, I didn't realize that this book was a Novella. If I had I would not have wasted a credit on it - turned it into a very expensive read. Hoping he will do some longer books soon. I prefer supernatural storytelling so will look for another, hopefully longer book for my next credit.

Easy to follow. Not a terribly complicated story line but very interesting and keeps you wanting to read more

Kind of a dumb story

not worth the money, was a good short story, but the reader made it sound so fake

not the best Terry Goodkind

i liked that there was no cursing or sex. very positive message. for younger kids. story is a bit juvenile. this entire book could've covered years...but it only covered hours. just not realistic expectation of real life

Well read, well written. I really enjoyed the pace of the book. Gripped me quickly and kept me interested throughout the story. Highly recommended!

loved the story and characters. hope it continues expanding what happens after the sky people leave and raging river

Story was great!! easy to follow, short, and with a wonderful twists at the end!!

Absolutely amazing story as well as nice narrator voice. Enjoy it so much! Recommend to listen