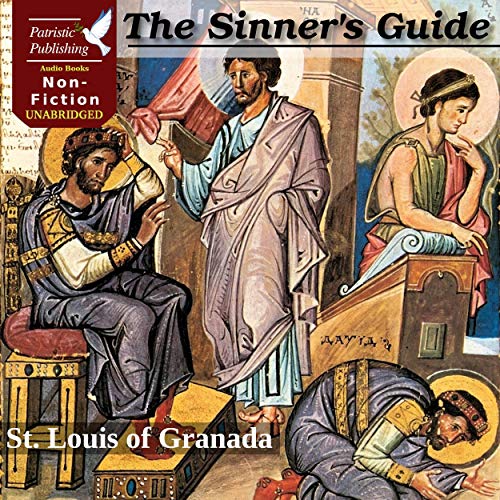 By: St. Louis of Granada
Narrated by: George Ellington

The Venerable Louis of Granada, OP (1504-1588), was a Dominican friar who was a noted theologian, writer and preacher. He is best known for his ascetical writings of which The Sinner's Guide has achieved the greatest success. It was published in 1555 and quickly became a classic being translated into Italian, Latin, French, German, Polish, and Greek. All the money he earned from the work went to the poor. The book has been compared with Thomas à Kempis's The Imitation of Christ.

St. Teresa of Avila said this book converted over one million people in her day. St. John of the Cross, St. Francis de Sales, St. Charles Borromeo, St. Vincent de Paul, and St. Rose of Lima, all claimed it as a favorite.

What listeners say about The Sinner's Guide

A solid examination of virtue

Recommended Narration Speed 1.25x. This is pretty much what you would expect in something written by a devout religious circa 1567. Ven. Louis presents a number of theological examinations that explore why we should (motive) practice virtue, and what benefits (privilege) we receive when we do so. As perhaps expected, these maxims are intended to guide for christian meditations more than an apologetic, so the "Pretty Prose" probably won't mean much to anyone looking for ration persuasion. It will however, provide points on which the faithful can think about in order to enrich an already existing (even if newly formed) faith. It should come as no surprise that the text has a more Catholic point of view given the time it was written and the affiliation of the author with the Dominican Order of Preachers (which was actually why I was interested in it). In that it does exactly what I expected it to do, it rates well, but not quite earn the top score ... still ... highly recommended for any who wish to explore their own christian faith. Motives for Practicing Virtue. • The Perfection of God • Gratitude for Creation • Gratitude for Providence • Gratitude for Redemption • Gratitude for Justification • Gratitude for Election • Thought of Death • Thought of Judgment • Thought of Heaven • Thought of Hell Privilege of Virtue • Care of the Father • Grace of the Holy Spirit • Knowledge to Virtuous Souls • Consolations of the Holy Spirit • Peace of the Conscience • Confidence of the Just • Liberty of the Just • Efficacy of Prayers • Assistance with Afflictions Follies • Deferring Conversion • Trusting in Mercy • Taking the Easy Path • Material Attachment Remedies • Resolution against all sin • Against Pride • Against Covetousness • Against Lust • Against Envy • Against Gluttony • Against Anger/Hatred • Against Sloth Duties • Venial Sins • Deadly Sins • Fullness of Justice • Duty to Neighbor • Duty to God • Obligations of State I was given this free review copy (ARC) audiobook at my request and have voluntarily left this review. #AudiobookBoom #TheSinnersGuide #GeorgeEllington

This is a wonderful spiritual treasure and one to be listened to, reflected upon and savored. Reminds me of St Francis de Sales, Introduction to the Devout Life. Love how he threads in Greek and Roman philosophers. The narrator did a wonderful job in his reading. Had the feeling it was St Louis sitting with me maybe in a small group. Highly recommend for any person of faith. Even if not, the logic and passion of the saint may challenge one to come to a deeper spiritual understanding.

This book was amazing it is worth all the audible credits! I recommend this for every Christian to read. Also very well narrated!! The importance of virtue and the ways of obtaining it , are most excellently displayed in this book. I can’t recommend this book enough

Thank you very much, St Louis for guiding us, for giving practical guides of what we can do while on earth, for reminding us to always keep in mind eternal life and preparation for it. Many saints found your writing beneficial to them, and I too hope to learn from you and emulate to strive for sainthood as well. I find some points still beyond my understanding, but i would take in what I can, and perhaps, with His grace, He’ll make me understand the other points you mentioned. Superb narration by Mr George Ellington! Thank you for giving life to the message and wisdom from above shared by St Louis. I sometimes find it difficult to focus when distracted by narration, but this one is an exception, it helped me focus on the message. it’s as if the saint himself is talking to me. (I got this audiobook as a free copy, and here I am leaving my honest review)